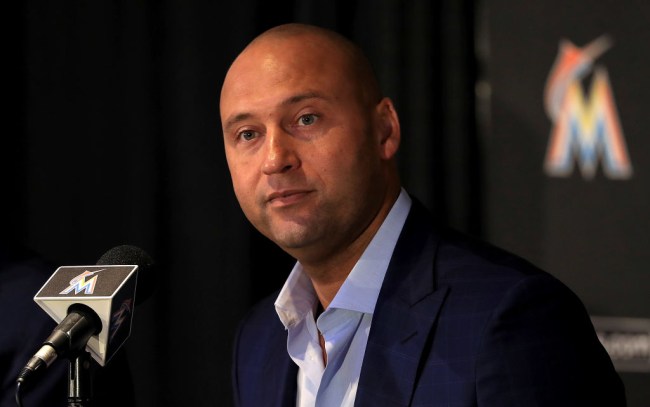 The Miami Marlins are a steaming pile of garbage after the team’s new ownership led by Derek Jeter decided to ship out all of their best players and rebuild from scratch.

Despite the complaints from frustrated fans, Jeter and co. believe that their decisions in the offseason are what’s best for the team in the long run.

We have a long-term strategic plan to make this organization sustainable over time,” Jeter said. “The only way to do that is to invest money into our Minor League system, player development and scouting. The only way to be sustainable is to have that pipeline of players coming along through the organization.”

“From the initial press conference, we’ve said there were going to be some unpopular decisions that are going to be made,” Jeter said. “Just know that every decision we make is going to be for the betterment of the organization.

On the very first pitch of the MLB season the Marlins gave up a home run and it was evident that they were in the midst of a very long season.

This was the first pitch of the season 😱 #OpeningDay pic.twitter.com/UmLJoIk6Ww

Of course the Internet instantly mocked jeter after the homer.

Derek Jeter is another bases loaded walk away from playing his greatest highlights on the Jumbotron while the Marlins game is going.

Let’s check in and see how the first inning is going for new CEO and team owner of the Miami Marlins Derek Jeter…#OpeningDay pic.twitter.com/PnVypA1oIo

Derek Jeter finna lead the Marlins to a 0-162 year

Great start to the Derek Jeter era in Miami. #Re2pect

So here's the first pitch of the new #Marlins season under Derek Jeter…Cubs homerun! pic.twitter.com/hmzNpxRWAD

Me to Derek Jeter, for constructing a team that started Jose Urena on opening day: pic.twitter.com/HYvwWNZFrq