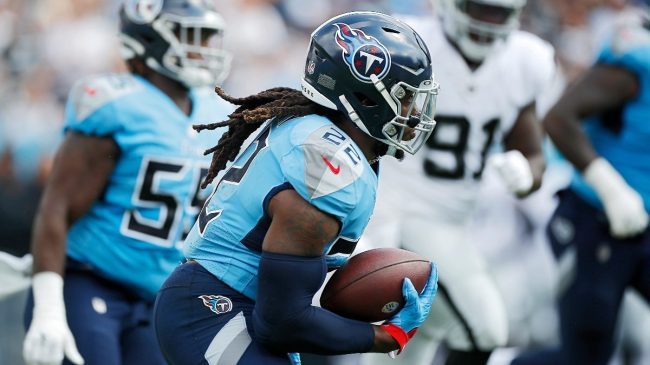 The Tennessee Titans are going up against a tough opponent in the Las Vegas Raiders, but have looked solid through the first portion of the game. Derrick Henry seems to be back to form in Week 3, which is essential for the team’s success. However, the superstar running back joined elite company in franchise history on Sunday.

According to John Glennon, the touchdown Henry recorded early against the Raiders is his 70th career score. That puts him in line with Eddie George (74) and Earl Campbell (73) as the only Titans running backs to hit the 70 touchdown mark.

#Titans' Henry hits 70 career TDs, joining Eddie George (74) and Earl Campbell (73) as only 3 in franchise history to hit that mark.

Derrick Henry is just four touchdowns away from tying the franchise record. He’s been an absolute beast throughout his career. It’s crazy he’s this close to breaking Eddie George’s record, considering the Titans’ star running back missed half of the season last year.

Regardless, the Titans’ offense has looked great so far in Week 3. Henry has looked like his normal self once again and was rewarded with a nice one-yard touchdown run at the beginning of the second quarter.

Tennessee has been dealt a tough hand due to injuries. For them to truly compete they need Henry running the ball strongly. After a rough two games, it’s nice to see Derrick Henry back to form against the Raiders. Although the Titans have fallen 0-2, they’re still in the hunt for the playoffs as the AFC South is a complete mess.

Look for Henry to keep rolling as the Titans aim to secure their first win of the season.