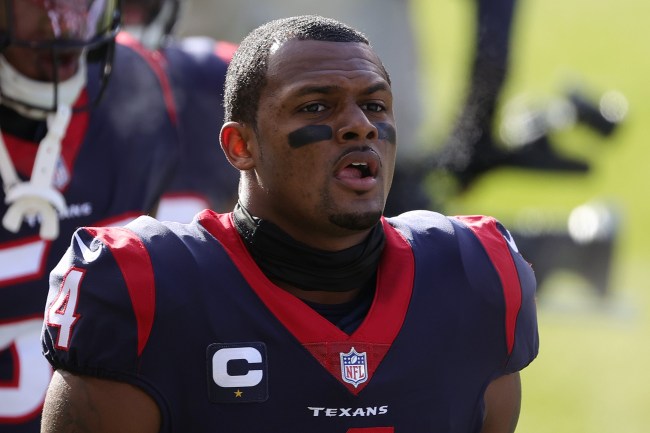 Prominent Texas Lawyer Tony Buzbee has responded to claims made by Deshaun Watson’s lawyer and his business manager Bryan Burney.

On Tuesday, Watson’s lawyer Rusty Hardin shared a declaration from Burney, who alleged one of the plaintiffs in the sexual assault lawsuits attempted to blackmail the Texans’ QB for $30,000.

1. My name is Bryan Burney. I am the marketing manager for Houston Texans quarterback Deshaun Watson, and have had this role for more than three years. I have personal knowledge of the facts stated in this declaration; they are true and correct.

2. In mid-January 2021, I spoke with an individual who I believe is the Plaintiff, identified as “Jane Doe,” in Jane Doe v. Deshaun Watson, Cause No. 2021-15613, currently pending in Harris County, Texas. It is clear to me that the person I spoke with met with Deshaun on December 28, 2020, the same day that Jane Doe contends in her petition that she met with Deshaun. When I spoke with Ms. Doe in January, she stated that she wanted a “settlement” from Deshaun, though what exactly she wished to “settle” was not clear to me.

3. During my discussions with Ms. Doe, I questioned the factual basis for the “settlement” that she was requesting from Deshaun. Ms. Doe informed me that she was asking to be paid $30,000 for what she referred to as “indefinite silence” about her encounter with Deshaun. I asked her what she would be silent about and whether anything had happened with Deshaun against her will. She confirmed that everything that occurred was consensual during her encounter with Deshaun. I asked Ms. Doe why Deshaun should pay for silence regarding something that was consensual – whatever it was. She said that it was a matter that both she and Deshaun would wish to keep secret and that she would need to be paid for her “silence.”

4. After my conversation with Ms. Doe, I received a call from a man purporting to be her “business manager.” Ms. Doe’s business manager told me that her encounter with Deshaun would be embarrassing if revealed and that Deshaun should pay to keep the matter secret.

5. I told this individual that his demand to be paid for not revealing a consensual interaction between two adults was extortion.

7. I informed this individual that Deshaun would not be paying the $30,000 requested.

8. In the years that I have known Deshaun, I have known him to be a respectful, decent human being. I do not believe him capable of the conduct that “Jane Doe” has anonymously accused him of in this case. This conduct is also completely inconsistent with multiple statements made by Jane Doe and by her “business manager,” indicating that her encounter

Buzbee, who is now representing 16 women who have filed sexual assault lawsuits against Watson, says Burney and his client repeatedly insisted many of the massage therapists sign non-disclosure agreements before and after inappropriate behavior took place during massage sessions.

Alleged sexual misconduct is serious. Attempting to criminalize or minimize those that speak out or step forward is wrong. I have been asked to respond to a released statement by Mr. Watson’s counsel.

My first reaction is that there have been so many massage sessions from Instagram that Mr. Watson can’t keep track of them—recall he, on Twitter, initially criticized me and denied everything. I can’t tell you how many people have stepped forward to report similar conduct or provide information. That info will be released, again in public filings—not in the media.

My second reaction is a question: why would his marketing agent admit Watson had sex for pay with a massage therapist, consensual or otherwise? We will also provide a copy of the non-disclosure agreement that Deshaun Watson and his marketing manager repeatedly insisted that Jane Doe (and others) sign after (and sometimes before) the “massage session,” which she refused to sign. I do appreciate Mr. Hardin’s professionalism and his words of support for victims, but would respectfully suggest there are many facts here, that we will put in public filings, that Mr. Hardin might not be aware of. We will provide additional details in a statement, consistent with our ethical obligations in due course. I’m hoping we can do so by Friday.

There’s going to be plenty of back and forth between Buzbee and Watson’s lawyers in the public arena for months to come which probably means these lawsuits aren’t going away anytime soon.