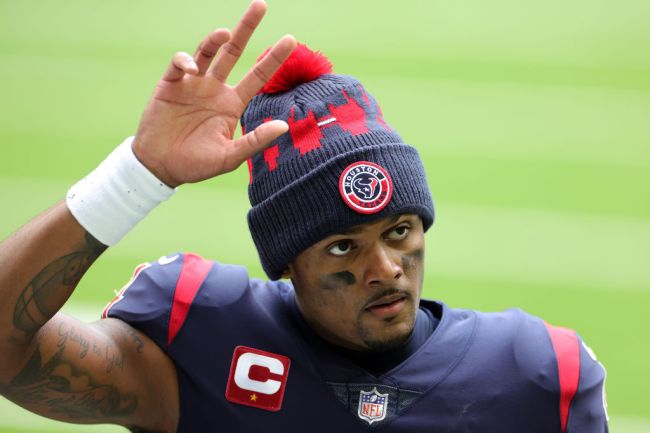 The Panthers benched starting quarterback Sam Darnold during the fourth quarter of Sunday’s loss to the Giants. Despite head coach Matt Rhule’s hesitation, the decision was simply inevitable.

Matt Rhule says he didn’t wanna embarrass Darnold so he was hesitant to bench him bc he knew what the story of the week would be. pic.twitter.com/upYpB505hb

After trading for the former New York Jets quarterback ahead of the 2021 NFL Draft, Carolina is reportedly expected to be in talks for another NFL quarterback.

Per The Athletic’s Joe Person, the Panthers are planning to seek a trade for Deshaun Watson.

League and team sources expect the Panthers to be involved in the Deshaun Watson trade talks.

With the NFL trade deadline looming in fewer than two weeks, Watson is expected to be the biggest name to watch. Although his legal situation remains unresolved, he has not been ruled ineligible by the league and could start right away on a new team.

Among those who are reported to be in the mix are the Eagles, Washington Football Team, and now, the Panthers. However, the Dolphins appear to be the clear front-runner to acquire the 26-year-old from Houston at this time.

If the Texans and another team do end up agreeing on a deal, the decision is ultimately up to Watson. He has a no-trade clause in his contract and will be in control of his future team.

Currently, Philadelphia is starting Jalen Hurts, Washington is starting Taylor Heinicke and Miami is starting Tua Tagovailoa. Carolina’s decision to bench Darnold makes thins particularly interesting, as it was unexpected that the organization would make another move at the position this soon.

Should the team choose to keep Darnold on the bench, P.J. Walker would be named the starter. At 3-4, the Panthers believe that they are in the mix for the NFC South title— or at least a Wild Card playoff spot.

Trading for Watson would indicate that the their cards are all-in on 2021, with Watson’s future uncertain.