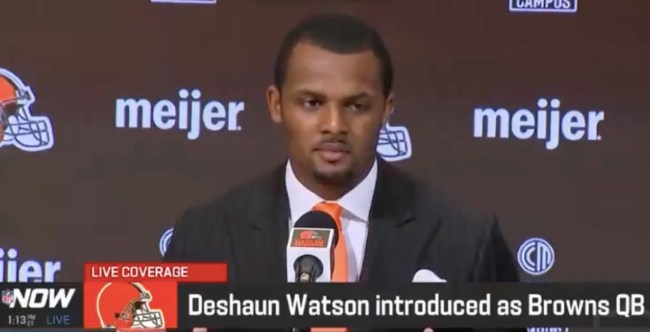 Deshaun Watson had his introductory press conference in Cleveland on Friday afternoon and the 26-year-old former Houston Texans signal-caller was understandably asked about the sexual misconduct allegations made against him.

In response to one of the questions, the former Heisman Trophy-winning QB said that he “never assaulted any woman” and “never disrespected any woman.” Watson then mentioned the fact that he was raised by a single mother and his two aunts while defending himself.

Deshaun Watson “I’ve never assaulted any woman, I’ve never disrespected any woman, I was raised by a single parent mom who has two aunties who her sisters and that’s who raised me” pic.twitter.com/ULaBONy0G3

Deshaun Watson says he has no regrets on anything that’s transpired “I never did anything that these people are alleging” pic.twitter.com/MPTdzKcFgl

Last Friday, the Texans — who originally drafted Watson out of Clemson University with the 12th overall pick in the 2017 NFL Draft — traded Watson to the Cleveland Browns for a 2022 first-round pick, a 2023 first-round pick, and a 2024 first-round pick. The Texans also received the Browns’ third-round pick in 2023 and fourth-round picks in 2022 and 2024. After trading for Watson, the Browns signed him to a fully guaranteed 5-year, $230 million contract.

Watson — who has completed 1,186 passes for 14,539 yards and 104 touchdowns during his five-year NFL career — sat out the entire 2021 season after being ruled out for every game for “non-injury reasons/personal matter.”

While two Texas grand juries have decided not to indict Watson on criminal charges, he’s still facing 22 civil lawsuits stemming from the allegations and could still be suspended by the NFL. At this time, though, it is unclear whether or not the National Football League will ultimately decide to punish Watson.

RELATED: Disgusted Lifelong Browns Fans Vow To Quit Rooting For The Team After Deshaun Watson Trade Due To His Sexual Assault Lawsuits