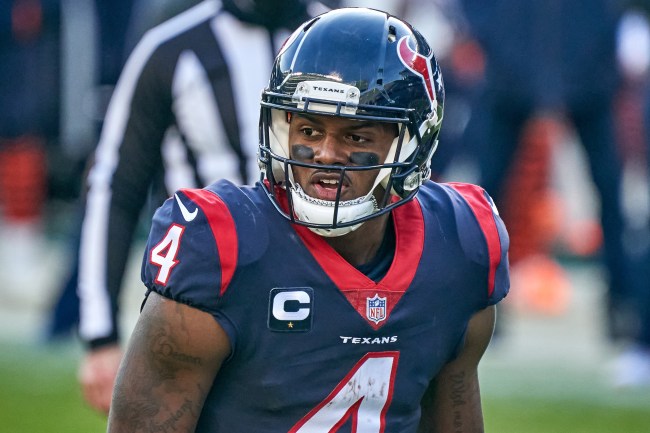 The deteriorating relationship between Deshaun Watson and Texans management is starting to leak, and it’s not looking good.

On Thursday morning, Pro Football Talk’s Mike Florio dropped a bomb when he revealed that Watson had been privately talking to teammates about requesting a trade.

The Texans have suggested that they’ll listen to quarterback Deshaun Watson when hiring a coach. But what if they ultimately don’t hire the person he’d like to be coached by?

Rumors already are circulating, and we’ve already heard them from multiple different people, that Watson has quietly broached with teammates the possibility of requesting a trade. If that’s happening, it may just be a strategic effort to ensure his views are respected by ownership. Regardless, it raises the stakes and crosses a bridge and potentially sets the foundation for Watson eventually to decide that he’d like to continue his career elsewhere.

According to NFL network’s Ian Rapoport, Watson has not been picking up the phone calls from the Texans front office because he’s extremely upset that he’s not being consulted with the team’s hiring of the next GM and head coach.

Deshaun Watson has not spoken to #Texans brass in the last few days, though they have tried to call him. https://t.co/6ObYHqrdgB

SI.com’s Albert Breer went on to add that Watson had advocated for the team to hire Eric Bieniemy and they didn’t even interview him.

Watson advocated for Chiefs offensive coordinator Eric Bieniemy—Pat Mahomes put in a strong word for EB with Watson—and the Texans didn’t even put in for an interview with Bieniemy.

Easy to see where he’d feel like they were just placating him by telling him he’d be involved. https://t.co/F3cTcyJkFU

The Texans have already stated that they won’t trade Watson but it’ll be interesting to see what happens if Watson keeps insisting that he wants out of Houston.