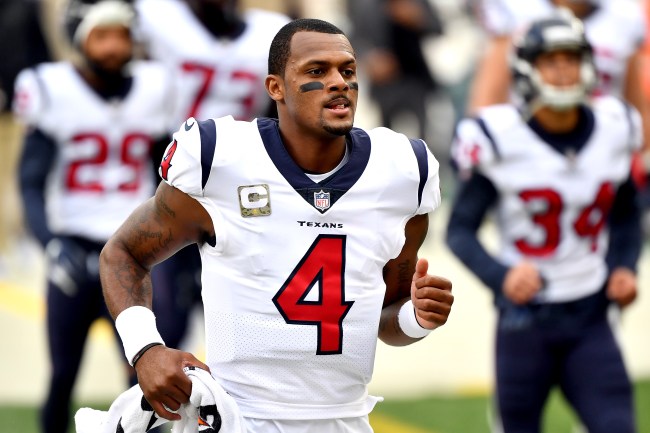 Deshaun Watson may be considering settling the lawsuits brought against him.

According to CBS Sports legal analyst Amy Dash, Watson is currently trying to settle all 22 sexual assault lawsuits brought forward against him.

According to Dash, she does not believe Watson would be facing any felony charges based on the accusations made against him.

After seeing Rusty Hardin presser today I just do not see Watson getting convicted on a felony charge based on a he said, she said, if this were to go criminal route. Most allegations would be misdemeanors anyway.

Dash’s report comes in the same week several sponsors dropped Watson as a spokesman costing him millions of dollars in lost revenue.

NRG Energy, the parent company of Reliant, has the naming rights to the Texans stadium in Houston. pic.twitter.com/RnS6z2t5zz

Deshaun Watson, the subject of 22 lawsuits alleging sexual assault and harassment, was estimated last year to be making $8 million from endorsements—the fourth-best figure in the NFL https://t.co/7XcfdDSO32 pic.twitter.com/1pSo6I70pk

Despite the Dash’s report, Watson’s lawyer Rusty Hardin says he “absolutely plans” to try all 22 lawsuits in court.

Rusty Hardin said he "absolutely" plans to take all 22 lawsuits filed against Deshaun Watson to trial. Doesn't look like a settlement is happening any time soon. Press conference is now over.