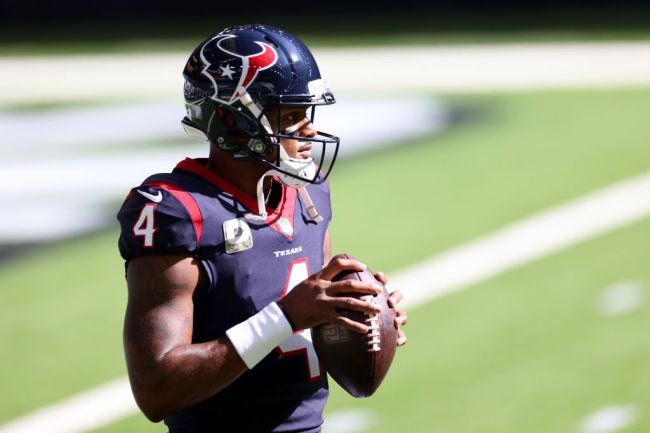 Superstar quarterback Deshaun Watson is not pleased with how the Texans handled the offseason hiring process for two important positions. Per Ian Rapoport, he was told by the organization that he would be included in the conversation surrounding its next general manager and head coach, but never was invited to be a part of discussion.

“Deshaun Watson is extremely unhappy with the organization after owner Cal McNair informed him he would be involved in the GM and coach hiring process and provide feedback… but then did neither,” tweeted the NFL insider.

This report comes two days after rumblings first began to circle surrounding smoke in Houston, and one day after the official hiring announcement of Nick Caserio. The 45-year-old will become the Texans’ newest general manager after working his way up with the Patriots. He began with his former team first in 2001 and has served as New England’s director of player personnel since 2008.

How Watson really feels about the hire is unknown, but Adam Schefter’s sources are saying that his feelings are not directed toward Caserio. His frustration, including a tweet that has since been deleted, is because he found out about the hire on social media. 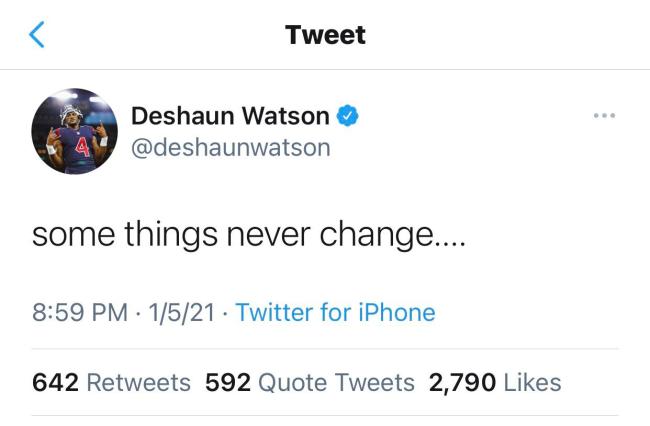 Watson has a lot of ball left in him at 25 years old and continues to be a tremendous quarterback in an organization that can’t seem to figure it out. Firing former general manager and head coach Bill O’Brien was a big first step toward success, but it sounds like the following process has been botched thus far. Pissing off your franchise quarterback is never a good thing. Since being drafted out of Clemson with the No. 12 overall pick in the 2017 NFL Draft, Watson is a three-time Pro Bowler and led the NFL in passing yards last season.

In the start of his prime, before O’Brien’s departure, he signed a four-year, $177.5 million contract extension with $111 million guaranteed. It keeps him in Houston through 2025 and is the second-biggest deal in the league’s history behind Patrick Mahomes. He has a record of 28-25 through four years as a starter, with more than 10 wins in 2018 and 2019, and the Texans are the only franchise to have never reached a conference championship. This year’s 4-12 record comes after trading DeAndre Hopkins, his top target, to Arizona in the offseason. J.J. Watt felt compelled to apologize to Watson after the season ended— though that also speaks to Watt’s attitude as a competitor. It’s that bad.

It’s understandable for Watson to be frustrated (despite the money) and he even kicked around the idea of requesting a trade. It would not only be difficult to trade a contract like what Houston paid No. 4 to be its guy, but it also doesn’t make sense, and I think both parties understand that. If (and that’s a big “if”) the Texans don’t completely bungle the head coach hire and keep Watson in the loop, things will work themselves out in the short-term. Should that be the case, this incident doesn’t mean that there isn’t a small fire starting to burn the bridge in the relationship.