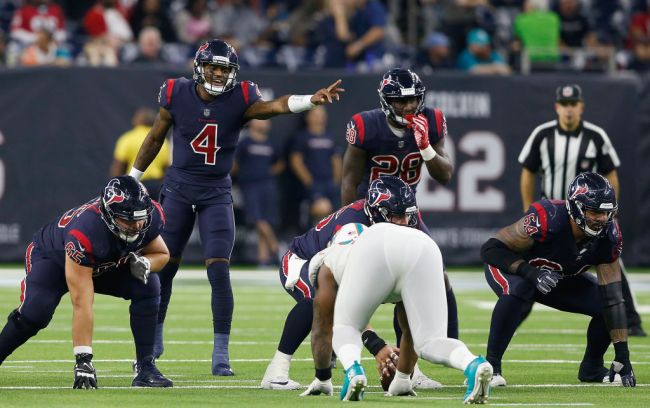 It appears there’s mutual interest between Deshaun Watson and the Miami Dolphins but unfortunately, it doesn’t seem the Texans are interested in Tua Tagovailoa.

Over the weekend the Watson to Miami trade rumors heated up when it was revealed that the Texans QB, who has a no-trade clause, is pushing for a trade to the Dolphins.

Sources said the #Panthers, #Broncos and #Eagles were also in some element of trade consideration, but Watson’s contractual right to approve the trade destination – which was signed off on by Houston ownership in his last extension – has weighed heavily in trade opportunities.

According to NFL insider, Benjamin Allbright Watson wants to go to Miami to play alongside former teammate Will Fuller.

He wants to reuinte with his buddy Will Fuller. https://t.co/oxtWRD5TJy

The one snag in a trade between the Dolphins and Texans is that Houston is not interested in Dolphins QB Tua Tagovailoa.

Via Armano Salguero of Outkick

Watson’s desire has not prevented the Texans from speaking with multiple other teams about a possible trade. But, knowing Watson’s ability to derail a trade he doesn’t want, Houston general manager Nick Caserio has spoken multiple times with the Dolphins and Panthers, according to a league source.

The Dolphins, interested in the quarterback but wanting to mitigate the risk of Watson’s uncertain future, have so far resisted the idea of including the three first-round picks the Texans have requested.

The Texans, by the way, are so far not interested in including Dolphins’ current starting quarterback Tua Tagovailoa in a trade.

It’ll be interesting to see how everything shakes out for the Texans and if they are actually able to trade Watson who is currently facing legal issues off the field after several women accused him of sexual assault.