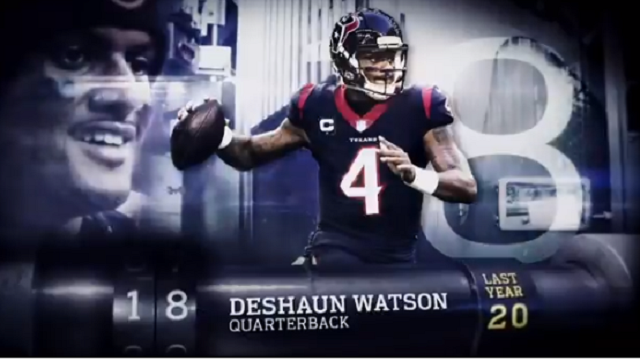 The NFL has no idea how to publicly address the Deshaun Watson situation and things are getting pretty awkward as the season approaches.

As of today, the NFL is currently investigating Watson after he was sued by 22 women for sexual assault. Watson, however, has not been suspended or put on the commissioner’s exempt list which means he’s still an active player.

Here's the language in the 2020 personal conduct policy regarding use of the commissioner's exempt list. The NFL hasn't used the designation with Deshaun Watson, indicating the league's ongoing investigation hasn't led Roger Goodell to believe a major violation occurred. pic.twitter.com/bKwiKPS7Ow

On Saturday the NFL network released the latest batch of NFL top 100 players and Watson’s name up as the 18th best player in the league. For Watson’s segment, the NFL produced an extremely awkward and gloomy highlight package that was extremely weird and out of place with the program.

The Deshaun Watson NFL Top 100 clip is so gloomy and awkward. Video lasts just one minute and 20 seconds, they had no players talk about him, and they started off with: "Nobody knows when Deshaun Watson will take the field again. His future is uncertain." pic.twitter.com/S0OGD4ADjz

It’s going to be really awkward if Deshaun Watson is still on the Texans’ roster when the season begins if the NFL doesn’t make a decision on the Watson situation.