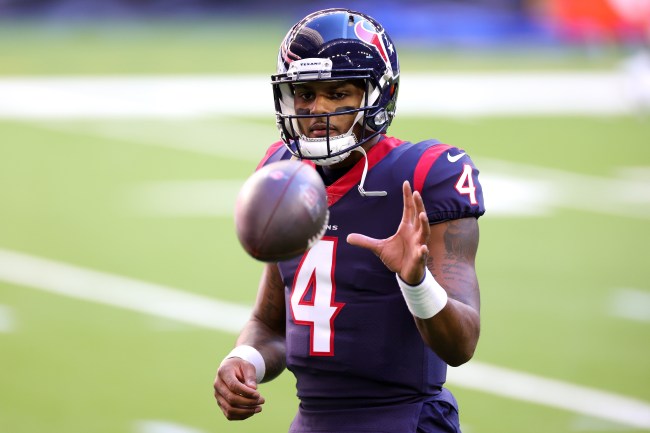 Earlier this week, Buzbee took to Instagram to say he would not be providing Houston Police with files in the Deshaun Watson sexual assault case as promised because he learned Hardin’s son worked in a commanding position at the department which he believes could compromise the HPD during their investigation.

Tony Buzbee, in an Instagram post, said that he "will go elsewhere to provide our evidence to investigative authorities" because the son of Deshaun Watson's attorney is "part of the Command Staff" of the Houston Police Department and "has a position that would compromise HPD."

Tony Buzbee, the attorney representing 19 plaintiffs who have brought civil lawsuits against Deshaun Watson, says he will not be taking information about Watson to Houston Police, contradicting what he has said previously. He claims this is due to a possible conflict of interest. pic.twitter.com/IfK9Wd3Gcl

Hardin responded by saying Buzbee’s excuse to not submit evidence to the Houston Police department was not only “insulting to the dedicated professionals at HPD” but also lacked common sense.

Since March 19, Mr. Tony Buzbee has repeatedly promised to submit evidence to the Houston Police Department in support of his anonymous clients’ complaints against Deshaun Watson. So far, he has not done so. Now, in response to media inquiries, Mr. Buzbee has abandoned his promise altogether and, in his words, will go “elsewhere to provide his evidence to investigative authorities.”

His latest excuse for failing to go to law enforcement is also his lamest. Anyone who has dealt with HPD, as I have for many years, would know that Mr. Buzbee’s suggestion that the Department would overlook legitimate complaints based upon a family connection of one of its officers is ludicrous. It is also insulting to the dedicated professionals at HPD and to common sense

Hardin then pointed out the fact that Buzbee once thanked the Houston PD for helping him out after his house was subject to a burglary back in 2019 .

Mr. Buzbee’s claimed fear of HPD’s partiality is inconsistent with his prior praise for the Department’s response to the burglary of his home during his recent mayoral campaign. See Exhibit 1 below.

I would respectfully suggest that Mr. Buzbee’s failure to go to law enforcement does not result from some baseless fear that HPD will not fairly investigate. Instead, it is from the knowledge that his parade of anonymous allegations could not survive the rigorous inquiry of trained investigators or the need to attest to the truth of the allegations under oath.

For our part, we will continue to learn about the cases in any way that we can. We and Deshaun will always remain available to any law enforcement or regulatory agency who desires our cooperation.

Apparently, Mr. Buzbee is unwilling to do the same. 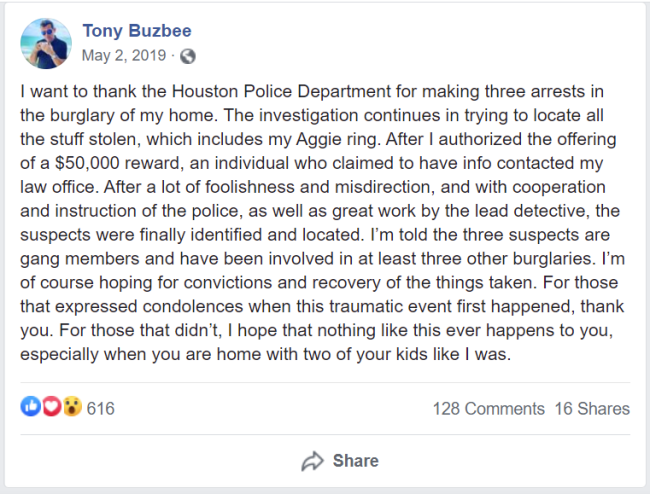 It seems like both lawyers are duking it out in the media before seeing each other in court.