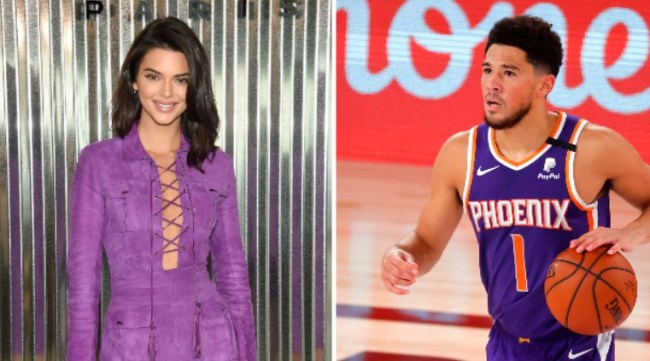 Devin Booker didn’t waste any time to get into some extracurricular activities after getting out of the NBA bubble.

A day after the Phoenix Suns were eliminated from playoff contention, Booker was spotted out with none other than Kendall Jenner, who has been linked with several other NBA stars in the past.

“Kendall Jenner was true to form — as in looking amazing — as she stepped out of Nobu restaurant in Malibu Saturday night, with a guy she’s said in the past she’s not dating, but if Kendall and NBA star Devin Booker are just friends, they’re REALLY good friends.

Kendall and Devin have chowed down at Nobu in the past. They’ve been seen together in various places over the last few months, including a road trip through Sedona, AZ. They’ve also been flirting online, so there’s definitely some smoke here.”

Kendall Jenner sparks further romance rumours with NBA Suns star Devin Booker as they step out for dinner together in Malibu. Kendall attempted to shield her face with a white cardigan as the pair left separately tried to keep their apparently blossoming romance under wraps. pic.twitter.com/bt0pDZOJwm

Kendall Jenner – In a white mini dress at a dinner in Malibu #KendallJenner #Kardashian #Jenner pic.twitter.com/rf1rBFY9DK