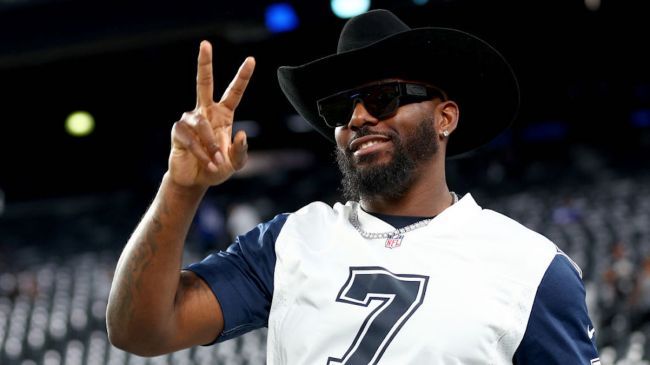 Former Dallas Cowboys wide receiver woke up on Wednesday morning and fired off a bunch of tweets about freedom of speech and things of the like.

While it’s impossible to confirm whether or not Bryant’s tweets have to do with him, they come following weeks of headlines surrounding controversial Instagram influencer Kanye West, who has been dropped by multiple creative partners following his anti-Semitic comments.

First, Byrant tweeted that “90% of time the story headline is misleading.” He then followed that up by saying “A lot of people can’t keep it real and that’s the problem…”

When somebody replied to one of Dez’s tweets thinking they knew who Bryant was talking about, the former Oklahoma State standout responded by saying “Wtf are you talking about? Your assumptions is [sic] a part of the problem.”

Bryant did, however, agree with one of the replies to his tweets that said “It’s always the celebrities/athletes that aren’t little puppets that get canceled.”

I don’t think Kanye Hate Jewish people… I listen to his entire interview his part of it https://t.co/HdBpe47vkr pic.twitter.com/Gv0z9r8Ba6

While athletes such as Jaylen Brown and Aaron Donald have left Donda Sports as a result of West’s anti-Semitism, Bryant now joins certified menace Antonio Brown in backing Kanye up.

Following West’s anti-Semitic comments across various channels and platforms, the fashion designer and former rapper has been dropped by his talent agency CAA, Balenciaga, and adidas. The loss of his adidas is a particularly devastating blow to West, as Forbes estimated it’s dropped his net worth from over $1 billion to about $400 million.