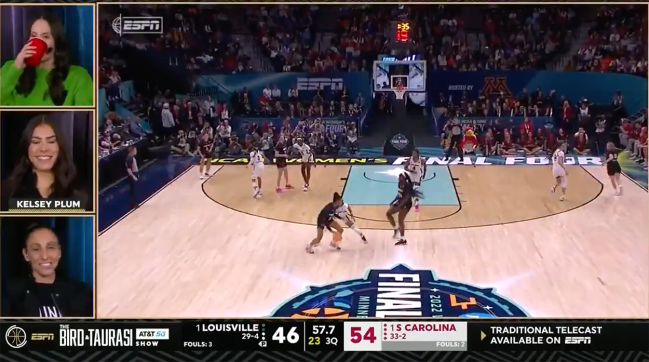 ESPN’s ‘Manningcast’ of Monday Night Football was a great success, so the network is trying to replicate the alternate broadcast across other sports. That was the case on Friday night as WNBA superstars Sue Bird and Diana Taurasi hosted a conversational-style broadcast of the women’s Final Four.

Both NCAA champions in their own right, Bird and Taurasi were joined by both sports and pop culture stars as they watched and broke down the semifinal matchups. During the first game, between Louisville and South Carolina, things took a turn with hilarious, phallic innuendo.

Late in the third quarter, the Gamecocks held an eight-point lead over the Cardinals and the two hosts were joined WNBA standout and Olympic gold medalist Kelsey Plum. That is when things got phallic.

Taurasi, discussing South Carolina’s stifling defense, spoke to the team’s length. However, she did so by saying that the cocks are long.

While it may have been a Freudian slip, the way in which she said it made it seem like it might have been an intentional cocks joke. As if she had been sitting on it all night and simply couldn’t resist the opportunity to slip it in.

Meanwhile, Plum couldn’t help but chuckle and Bird had to take a sip of her drink to avoid cracking up from the joke. After the joke was made, the broadcast sat in silence for a moment which let the joke sink in and made it even funnier.

Incredible television. Taurasi is the best.