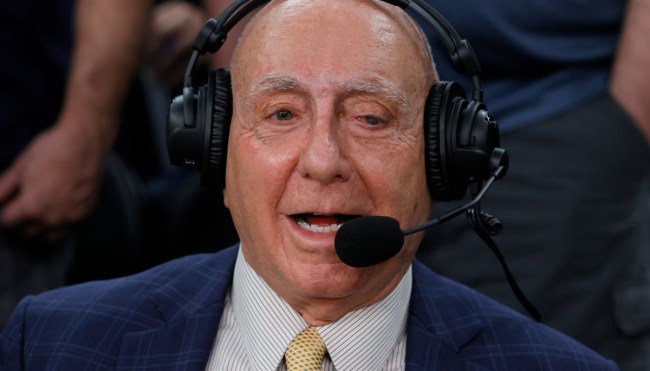 It’s been more than 40 years since Dick Vitale called the first college basketball game that was ever aired on an up-and-coming network known as “ESPN,” which marked the start of a truly legendary career for one of the most notable names in the history of sports broadcasting.

Vitale is basically the Guy Fieri of the college basketball world thanks to his unbridled enthusiasm and undying love of signature catchphrases, and while he can be a somewhat divisive figure, he’s one of those guys you sort of have to respect thanks to the passion he brings to the table when it comes to covering a sport he adores.

Dickie V is still going strong at the age of 82, as he quickly returned to the booth last year after undergoing treatment for lymphoma shortly after he underwent multiple surgeries to combat melanoma. Things took a turn for the worse just before 2022 rolled around when he revealed his doctor had instructed him to rest his vocal cords due to a pre-cancerous growth, and while it’s unclear if he’ll be returning to the airwaves anytime soon, we got a great update concerning his future on Tuesday afternoon.

Based on a recent PET scan, Vitale is now officially cancer-free, and he hopped on Twitter to inform the world about the incredibly promising development while expressing his excitement with the help of the perfect metaphor.

OMG ALL THE PRAYERS many of u have sent have been answered as DR Brown who heads my cancer TEAM called & said PET SCAN came back that NO CANCER is showing. I feel like a coach playing for the Final 4 has a PTPer hit a shot at buzzer. My MARCH MADNESS starts with a W baby ! pic.twitter.com/HS2yI3wgpB

To borrow a phrase from the legend himself: this is awesome, baby!