Sorry Phillies Fans: The World Series Did *Not* Actually Shake The City Of Philadelphia On A Seismograph 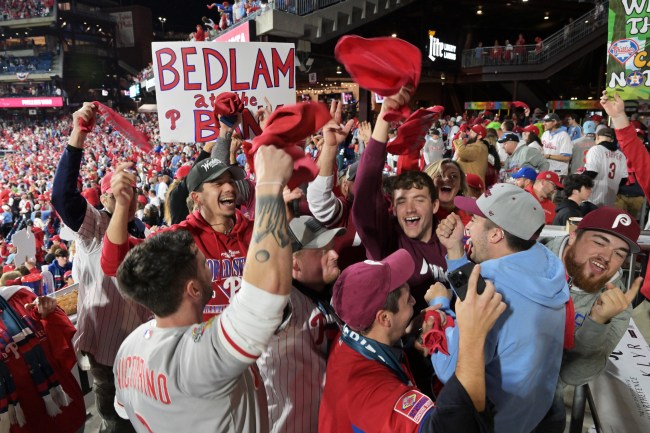 How about those Phillies?

The Philadelphia Phillies decidedly won Game 3 of the World Series, destroying the Astro 7-0 at Citizen’s Bank Park and going up 2-1 in the series. This marks the Phils’ sixth straight home playoff win, with the bats showing up in showstopping fashion.

Astros starter Lance McCullers Jr., meanwhile, set a record for the most dingers given up by a pitcher in a World Series game.

It’s not a question of if the Philadelphia Phillies keep dancing on their own.

It’s a question of how hard the Philadelphia Phillies keep dancing on their own.

Turns out, not quite hard enough to cause an earthquake.

Did reactions to the Phillies really cause the City Of Philadelphia to shake?

Sorry, Phillies fans. It did not.

It is a good story, though.During the middle of World Series Game 3, a tweet went viral that claimed Bryce Harper and Alec Bohm’s home runs in the first and second inning caused the City Of Brotherly Love to shake so hard, the earth actually shook in Philly:

It sounds like a nice claim to fame about the intensity of Philadelphia sports fans. Another notch in the belt to add to Philadelphia’s overall sports mythos, like greasing light poles, booing Donovan McNabb, and throwing snowballs at Santa.

But it turns out, the tweet, pictured above, is just fake news and a proper troll job.

Bryce Harper and Alec Bohm’s home runs did not cause the seismograph reading that went viral shortly afterward.

Many Philadelphia sports fans, however, (hey, including myself) latched onto it in a stupor of World Series euphoria. We got got.

Where is it from?

According to an eagle-eyed Redditor with a brain full of common sense, it’s actually a seismograph chart of a recent 5.1 earthquake that jolted the Bay Area. The seismic event pictured actually happened on October 25 and was felt all up and down the Bay Area.

The original source of the image that went can be found via the Mercury News, which serves the San Jose area of California. It’s the exact same image.

Another illustration, below, allegedly shows a screenshot from The Pennylvania Seismic Network. But if you spend enough time looking at other readings at other campuses, you’ll see that these jolts seem pretty indistinguishable and seem to be normal behavior.

regarding if the world series is making the entire crust of the earth shake in Philly:
ok i dug around for the waveform and there are some spikes . brandywine is PSUB on the paseis sensor network https://t.co/1CtUObShE5 pic.twitter.com/OqfSc35I1P

Turns out, correlation doesn’t equal causation and all that. Also: Don’t believe everything youse see on the Internet – especially Twitter, which is now owned by meme-loving billionaire Elon Musk.

Regardless, given how many people took the bait, this whole troll job is going to go down in Philadelphia sports history one way or the other.

It’s part of the culture now.

If there’s one thing the City Of Philadelphia loves, it’s leaning into its own mythology on stuff like this. It’s a great tall tale, full of larger-than-life embellishment like a “one that got away” fishing story. Generations of Philadelphia sports fans like myself will tell their kids and grandkids about the time Bryce Harper hit a home run so hard in the World Series, the city shook in reaction.

Sure, it didn’t actually happen and got dupped by Internet prankers. But we sure thought it happened.

I’m pretty sure I heard all kinds of similar stories back in the day from my own father and grandfather, like how the Liberty Bell got its crack and what really happened at the Eagles game where Santa got hit by snowballs (read: “maybe he was a Cowboys fan?”).

Here’s to Red October turning into Burn It Down November.

The City Of Philadelphia might not exist if the Phillies win the World Series, the Union win the MLS title against LAFC, and the Eagles keep their win streak alive.