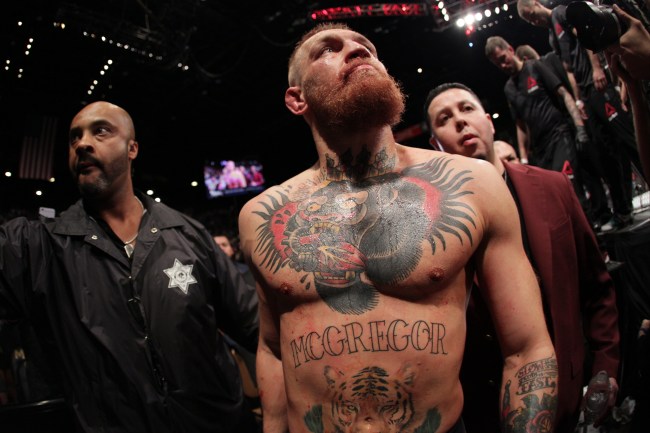 LAS VEGAS, NV - MARCH 5: Conor McGregor exits the Octagon after his fight against Nate Diaz in their welterweight bout during the UFC 196 at the MGM Grand Garden Arena on March 5, 2016 in Las Vegas, Nevada. (Photo by Rey Del Rio/Getty Images)

The Walt Disney Company (DIS) and UFC have agreed on a multi-year media rights deal that will bring 15 live UFC events exclusively to ESPN+ (ESPN’s DTC streaming service), effective January 2019. The MMA fight cards will be branded as “UFC on ESPN+ Fight Night”, with each event featuring 12 bouts. In addition to the 15 fight cards, ESPN+ subscribers will have exclusive access to a new season of “Dana White’s Contender Series” (begins June ’19), a new all-access series produced by IMG Original Content and pre-fight/post-fight shows. UFC FIGHT PASS (UFC’s DTC streaming service) and UFC PPV events are not included in the subscription, though can be both purchased and viewed in-app.

Howie Long-Short: This partnership didn’t exactly come out of left field, we noted back in April that ESPN was considering in a joint bid with Fox Sports for UFC broadcast rights. It was rumored at the time that ESPN was willing to spend between $120 million – $180 million annually, to add +/- 15 exclusive UFC events to its burgeoning OTT platform. Ultimately, the 2 companies agreed on a deal worth $150 million annually over 5 years.

The deal would seem to make sense for both sides. Disney (DIS) adds valuable content to its growing ESPN+ library and will pull subscribers from a different pool than fans of stick and ball sports, while the UFC lands a lucrative deal for their streaming rights and finds a broadcast partner willing to promote their PPV events (see Fan below); an overlooked but valuable piece of the agreement.

It should be noted that the UFC is still looking to sell a linear broadcast package with 20+ events, their existing deal with FOX (worth an avg. of $165 million/year) expires in December. The new deal is expected to fetch at least $200 million annually.

Fan Marino: Buried within the press release, was the news that the first-ever rights and distribution agreement between DIS & UFC includes exclusive 30-minute specials previewing upcoming PPV events and re-airs of current PPV events (on ESPN’s linear and digital networks); seemingly indicating that fight fans would see more UFC coverage on cable television, but I’m not sure. Sure, ESPN’s talking heads will issue their share of UFC “hot takes” ahead of PPV events, but fans are likely to get less in-cage action assuming the 15 events heading to ESPN+ are the cards that previously aired on Fox or FS1.

Looking for free MMA action? Download the new ONE Championship app. The company just introduced a mobile application that will bring all their fights to consumers around the world for free, including events previously only available to U.S. fans on PPV (online).

Telemundo, which controls U.S. Spanish-language broadcast rights to the 2018 FIFA World Cup, has announced Coca-Cola, Sprint and Volkswagen will be premier sponsors of their tournament coverage. Coca-Cola will be the presenting sponsor of the Telemundo Deportes Post-Game show and in-game match clock, Sprint has signed on as the official halftime sponsor for all 64 matches and Volkswagen will serve as the presenting sponsor of the network’s World Cup primetime show (7p EST). In total, 20 advertisers have signed on for Telemundo’s coverage of the quadrennial tournament; NBCUniversal is claiming network ad inventory is “approaching 75% sold out.”

Howie Long-Short: The absence of the USMNT from the 2018 World Cup has been a boon for Telemundo, as advertisers have chosen to forego spending with Fox Sports (own U.S. English-broadcast rights) in favor of the NBCUniversal subsidiary (note: VLKAY, VZ are not among them, they will be advertising on both networks).

While the U.S. team’s failure to qualify has helped Telemundo ad sales, it’s expected to hurt viewership. In ’14, matches featuring the USMNT on Univision (held U.S. Spanish-language rights) drew an audience 44% larger than other group stage matches. With no USMNT to build programming around, Fox has also increased their focus on the Mexican national team; coverage likely to pull viewers from Telemundo’s target audience, the 21 million bilingual viewers in U.S.

Telemundo is owned by NBCUniversal, a Comcast (CMCSA) company. NBCUniversal tabbed February it’s “best Feb ever” after generating $1.6 billion in incremental revenue from the Super Bowl and Olympics, so significant fiscal growth was expected when CMCSA reported Q1 earnings in late April. The company reported net income increased +21.2% YoY (to $3.1 billion), a figure that would have been higher had Universal Pictures not experienced a -16% YoY decline in revenue.

Fan Marino: The U.S. isn’t the only high-profile country to have failed to qualify for this summer’s World Cup, as Italy (4x winner), The Netherlands (finished 3rd in ’14), Chile (No. 9 in world) and Cameroon (just 2nd missed WC since ’86) will all be watching from home as well.

Looking for a team to root for? Iceland is in the tournament for the 1st time and their Viking chant is among the best traditions in all of sports.