Diver Finds Over 50,000 Golf Balls Sitting At The Bottom Of The Ocean Near Pebble Beach 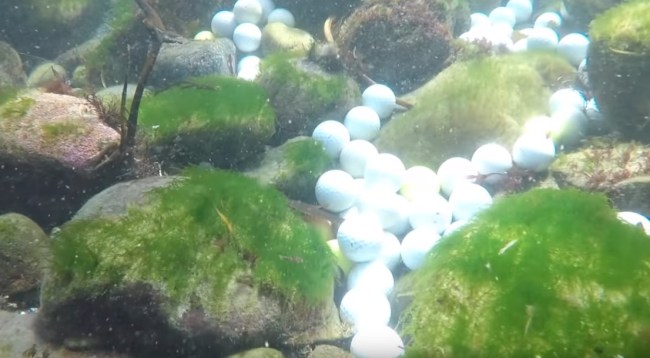 I have often wondered how many golf balls end up just sitting at the bottom of an ocean, lake, or pond when a golf course features holes near the water. Turns out that number is WAY higher than I ever imagined.

Because when a young diver and her father were exploring the water off Pebble Beach they were shocked to discover THOUSANDS of golf balls lining the ocean floor, reports NPR.

Two years ago, a 16-year old diver named Alex Weber was swimming off Pebble Beach along the Pacific near Carmel, Calif. “My dad raised me underwater,” says Weber, and she means it. She’s a free diver: no scuba tanks; she just holds her breath. She was diving in a small cove and looked down and saw something weird. “You couldn’t see the sand,” she recalls, still sounding incredulous. “It was completely white.”

White with golf balls. “You looked down and you’re like, ‘What are you doing here?’ ”

There were thousands of them. “It felt like a shot to the heart,” she says.

She was offended. Right then, she decided to haul them up. Thus began a Sisyphean task that went on for months: She and her father would haul hundreds of pounds of them up, and then of course more golfers would hit more into the ocean.

So when she heard about a scientist at Stanford who studies plastic waste in the ocean, she emailed him and he came to look at the collection of 50,000 golf balls she had accumulated in the family’s garage.

The scientists, Matt Savoca, told her she should write a paper on her findings, but being just 16-years-old, he had to help. Which meant diving with her in the cold water off the coast of California.

There are sharks in the water there, but Savoca says that wasn’t the real threat. “When we were out there,” he says, “We’d hear, ‘plink, plink,’ and we’d look up on the hill and there’d be golf balls flying in off the course right into the ocean where we were doing collections.” Despite the aerial barrage, they kept at it, says Weber. “Whenever we had good conditions, we were able to pull out between, like, 500 to 5,000 golf balls,” she says.

Over two years, they found more than 50,000 golf balls. The source: five golf courses. Two along the coastline, and three up the Carmel River — those golf balls rolled underwater down the river to the ocean.

This is a problem, you see, because “golf balls are coated with a thin polyurethane shell that degrades over time. They also contain zinc compounds that are toxic.”

Weber, now 18, plans to study marine science in college and already has her own website, The Plastic Pick-Up, with the mission of “showing people where their pollution goes, and to help reduce the marine pollution problem by education and removal.”

Good for her. After all, George Costanza, marine biologist, can only do so much.