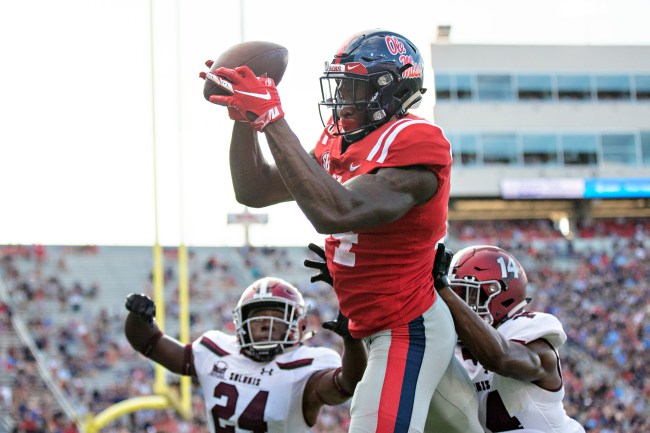 D.K. Metcalf is an absolute tank of a human being. The former Ole Miss and future NFL wide receiver stands 6’4″ and weighs about 225 pounds, so the thought of trying to matchup with him one-on-one is frightening for any cornerback, regardless of how talented a guy might be.

As one of the most intriguing prospects at this week’s NFL Combine in Indianapolis, with many experts thinking D.K. Metcalf is a first-round talent, there will be a lot of eyes on the kid, who got a lot of attention earlier this month when a photo of him went viral because he looked like the f’in Hulk next to some other future NFL players. Remember this floating around social media? Yeah, it’s terrifying to think Metcalf can get even bigger.

There are other NFL prospects in this picture and D.K Metcalf still sticks out like a sore thumb😳😂 #NFLDraftNews pic.twitter.com/wbwvA79e70

Considering D.K. Metcalf continues to show-off muscles in places most people didn’t even know they had, it’s safe to assume the dude has always been built like a rock. And, while I don’t have any proof that that’s the case, Metcalf’s dad, Terrance — who’s a former NFL player himself — did his best to explain how strong his son was at an early age. In fact, in a video with Under Armour Terrance said that his son was squatting 100 pounds and benching 50 pounds, all at five years old. Take a look at the video below.

Guys, is this not insane to you? Want to know what I was doing at five years old? Probably still pissing my pants and trying to learn how to throw a baseball, not lifting as if I was going to be a future NFL player. Then again, I’m not a future NFL player, so that’s probably why D.K. Metcalf is projected to make millions playing football while I sit here amazed that he could squat someone twice his age at five years old. I guess some people were just born to be better than others.