NFL Draft Prospect D.K. Metcalf Might Be A WR, But He Looks More Like The Incredible F’in Hulk In This Pic 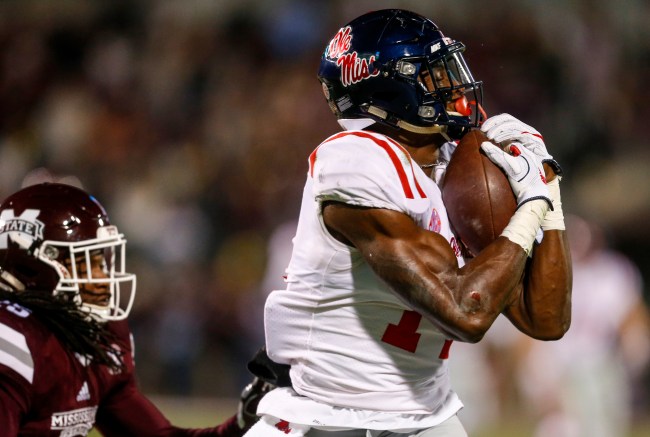 D.K. Metcalf might be projected as a first-round wide receiver in the upcoming NFL Draft, but, damn, you’d have a tough time convincing me he wasn’t a linebacker after seeing the recent picture of the Ole Miss star posing shirtless with some other NFL prospects. Just take a look at what Metcalf looks like in the photo below, and notice just how jacked up he is compared to some of his peers.

There are other NFL prospects in this picture and D.K Metcalf still sticks out like a sore thumb😳😂 #NFLDraftNews pic.twitter.com/wbwvA79e70

Yeah, it’s safe to say that D.K. Metcalf has been hitting the weight room in preparation for the NFL Combine, so I kind of expect him to excel in all of the fitness and weightlifting tests while there. After looking at that pic again of him next to other NFL Draft prospects, it’s like D.K. Metcalf is a man standing amongst boys — and I’m sure some NFL teams are salivating right now.

Of course, after this picture hit the Internet, people had tons of reactions, so here’s some of the stuff people were tweeting about the Incredible Hulk AKA D.K. Metcalf.

NFL Scout: I have D.K. Metcalf Projected to go pick 18

D.K. – Stares into the Scouts eyes

Who wore it better, D.K. Metcalf or Aaron Donald? pic.twitter.com/WYJuMq0yNs

D.K. Metcalf is a WIDE RECEIVER. 😳

Good luck bringing him down. 💪

DK Metcalf beating press at the line like pic.twitter.com/7Lf7XIHhgQ

Listed at 6’4″ and 230 pounds — which probably came prior to his last season at Ole Miss — something tells me that D.K. Metcalf is more like 240 pounds of straight-up muscle. It’ll be interesting to see how that much bulk might impact his agility and speed at the NFL Combine, but, hey, like Field Yates mentioned in his tweet above, maybe that’ll just lead to teams trying Metcalf out at linebacker or safety instead. OK, that won’t happen, but it’s be pretty hilarious.

What’s even scarier about this is that D.K. Metcalf, a receiver, looks eerily similar to reigning two-time Defensive Player of the Year Aaron Donald with his shirt off. Every NFL cornerback is probably already losing sleep just thinking about having to cover this kid, because, whoa, dude is yoked.