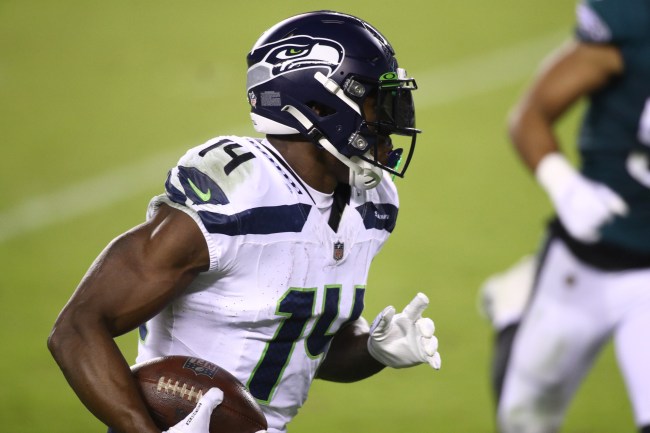 DK Metcalf had himself a career game against the Eagles, and it was apparently because one of Philly’s coaches made him angry before the game.

On Monday night, Metcalf set his career-high with 177 receiving yards in the Seahawks’ 23-17 win over the Eagles after looking absolutely unstoppable on the field.

DK is a matchup nightmare. This catch 😱

After the game, Metcalf revealed he had extra motivation to perform on Monday night after Eagles defensive coordinator Jim Schwartz told him “I was in Detroit with Megatron but you’re not there yet.”

Metcalf said he had that comment in his mind all game.

He then torched Schwartz' defense for 177 yards.

Here’s the video of DK Metcalf talking about the pregame incident with #Eagles’ DC Jim Schwartz. Metcalf says Schwartz told him: “I was in Detroit with Megatron but you're not there yet."

Update: Schwartz said he was trying to compliment Metcalf.

Jim Schwartz says he complimented DK before game, told him he’s got ton of respect for him & he was with Calvin in Detroit & he’s closest thing to Megatron he’s seen. Jim told him after game, “you may not be Calvin yet but you’re on your way.” Was complimenting @dkm14 both times https://t.co/m5S8naG4Ih