D.K. Metcalf’s Mic’d Up Provides An Inside Look At How Scary He Really Is 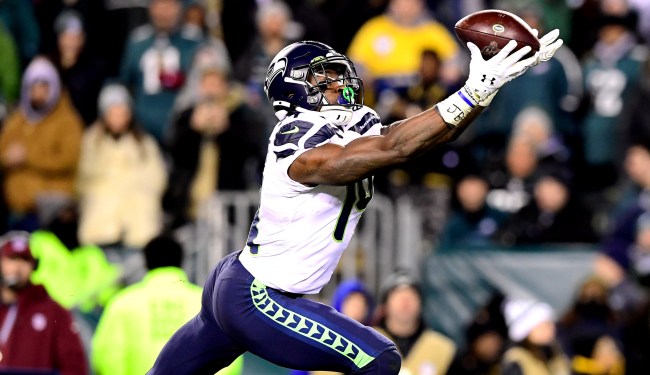 One of the biggest headline-grabbers of the 2020 NFL season is Seattle Seahawks wide receiver D.K. Metcalf. The 6-foot-3, 230-pound pass-catcher is built like the hulk and runs a 4.33 second 40-yard dash. He’s an absolute freak. Through the first eight games of his second season, the Ole Miss product has recorded 680 yards and seven touchdowns on 36 catches. He was mic’d up for Sunday’s win over San Francisco and it gives a pretty in-depth look at the nightmare he must be for defensive backs.

A few highlights come with a montage of the Mississippi native absolutely bullying his man-marked defender. Metcalf laid the lumber over the middle on a few occasions and bodied the smaller defensive backs.

D.K. Metcalf is that kid who played down a grade in Pop Warner, but in the NFL pic.twitter.com/Lx41fv7wcr

Another fantastic moment is when Metcalf makes a tight catch in the middle, gets popped by a strong safety coming down from overtop, takes a moment to gather himself and stands right up to single first down.

A few moments later, 49ers defensive back K’Waun Williams lines up across from Metcalf on the line of scrimmage. Williams is 5-foot-9, 185 pounds. He has a six-inch and 45-pound disadvantage to the man he is set up to guard. The play goes on the ground and Metcalf blocks him into the goal post.

On the bench after the play, he says that Williams grabbed him by the facemask and told him to “stay on his feet,” to which Metcalf replies “fix your shoulder pads.” It’s clear that Seattle’s top receiver is not from this planet, and it’s still wild to remember that Ole Miss’ offense had both him and A.J. Brown.