DK Metcalf Pulled Boss Move By Showing Up Shirtless To Pre-Draft Meeting With Seahawks, And Pete Carroll One-Upped Him 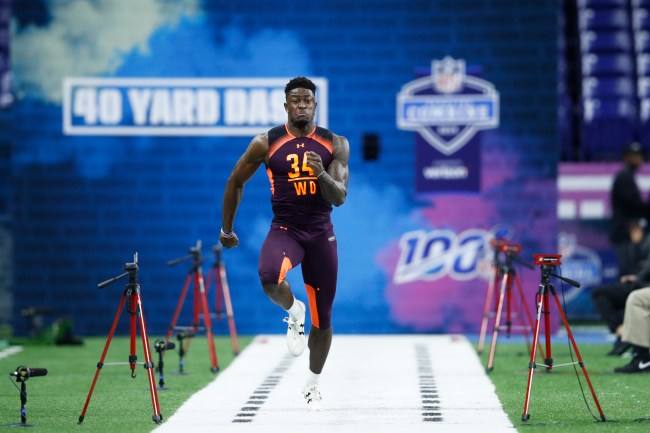 DK Metcalf is a beast. No, really, the former Ole Miss Rebels wide receiver who was just drafted in the second-round of this year’s NFL Draft is so swole that he caused paranoia with some of the pictures that popped up on the Internet of him the past through months without a shirt on. Then, to prove to everyone that he was more than just shredded up, he went out and totally demolished the NFL Draft Combine, putting up Herculean-like results during the various skills tests. Needless to say, the dude is a bit chiseled, just take a look below.

When a dude is that yoked, it’s pretty much expected that he’s going to walk around shirtless and flaunt that sh*t as much as possible — but at a job interview? It might not be something you or I would want to do, but for DK Metcalf, it’s the bold choice he did while meeting with the team that just drafted him, the Seahawks, when the two sides were meeting prior to the NFL Draft. Not to be outdone, though, Metcalf got one-upped by Seahawks head coach Pete Carroll, who saw the wideout’s power move and decided to take his shirt off, too; and the entire thing was captured on video for all of us to see.

Not sure Carroll quite matches up with DK Metcalf here, but, hey, the dude’s 67 years old and still a legend by pulling sh*t like this, so there’s no shame from the Super Bowl-winning coach. The story of how it all happened is pretty funny, too.

“I was surprised that he came into our interview with his shirt off,” coach Pete Carroll said, drawing laughter from general manager John Schneider and the assembled media, after the Seahawks chose Metcalf 64th overall Friday night.

The backstory goes like this: Seahawks area scout Aaron Hineline and co-director of player personnel Trent Kirchner convinced Metcalf to take off his shirt before walking into their meeting in Indianapolis, exposing the hulking physique that had made headlines in a viral photo from a few weeks earlier. The idea was to throw Carroll off.

“Yeah, we’re serious,” Carroll said. “He did. He came in with his shirt off. It kind of pissed me off, so I took my shirt off, too. Not for long, though.”

Carroll was kidding about being miffed but not about how he responded. The Seahawks tweeted the video. Metcalf enters with nothing but a credential and a chain covering his upper body. A fired-up Carroll responds by taking his own shirt off before giving Metcalf a hearty handshake.

If DK Metcalf’s play can match his workout skills, the Seahawks will be pretty pumped up.