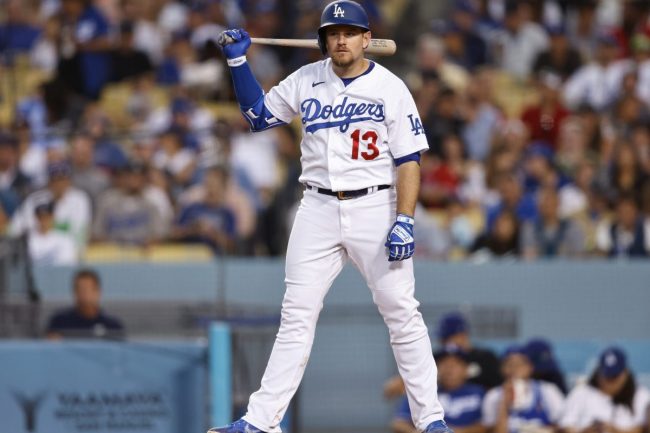 The Dodgers decided to make a move at the trade deadline, adding former New York Yankee Joey Gallo. The slugger is a two-time All-Star that boasts a ton of power from the left side of the plate.

While with the Rangers, Gallo racked up a pair of 40-homer seasons. He then moved on to the Big Apple, where he’s seen his production decline.

As a Yankee, the lefty hit just .159 while accumulating 194 strikeouts in 501 plate appearances, a K-rate of 39%. He led the majors in strikeouts last season.

Gallo did not enjoy his time in New York, saying that he hit rock bottom with the Yankees. He’ll look for a fresh start in Los Angeles where he joins the first-place Dodgers.

Gallo adds some power to a lineup that already ranks third in the National League in dingers, but there’s a glaring weakness at the bottom of that Dodgers order.

Max Muncy and Cody Bellinger find themselves in similar situations to Gallo. Both boast big power, but they strikeout at an awe-inspiring rate.

The two have combined to smack 23 home runs this year, but they’ve struggled with swings and misses. Muncy is hitting just a tick higher than his new teammate at .162, and his K-rate sits above 25%. Bellinger is hitting .205 with a 28% strikeout rate.

For reference, the league averages rest around .243 and 22% in those categories, respectively.

Now, the Dodgers will have three of the league’s worst hitters in terms of strikeouts and batting average anchoring the bottom of the order. Fans have been quick to react to seeing the disappointing trio together in LA.

With the Dodgers adding another struggling power hitter to the lineup, many around the MLB are taking the opportunity to troll on social media.

According to CBS Sports, the duo of Gallo and Muncy have recorded historic lows.

Bellinger hasn’t been much better, sitting just above the Mendoza line at .205.

Take a look at the immediate reaction to seeing the three hitters in the same order.

MUNCY BELLINGER AND GALLO ALL IN ONE LINEUP pic.twitter.com/3eoxEoxy0G

Muncy Bellinger and Gallo at the bottom of the lineup https://t.co/TrfyyQNfDK pic.twitter.com/mGX3mDvLdB

Gallo, Muncy, and Bellinger when they go a combined 0-11 with 8 strikeouts in a game pic.twitter.com/Me8lqdetFp

Pitchers when they see that gallo muncy belli 6-7-8 of the order pic.twitter.com/8xh1nndWnr