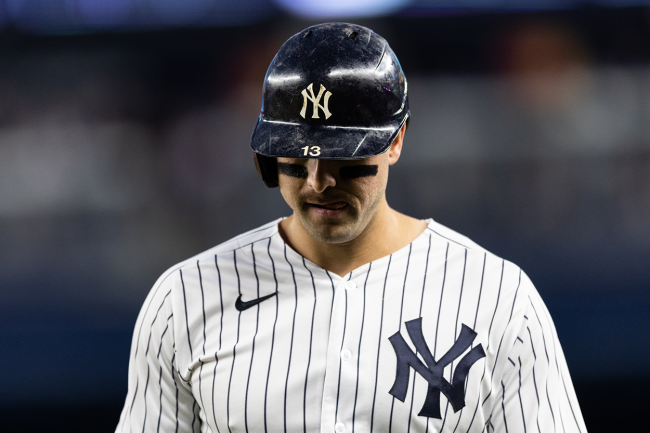 As a result of his poor play, Gallo is not a fan favorite. In fact, he is openly disliked.

Yankees fans are not known for their kind-hearted forgiveness or understanding, which has made Gallo’s time in the Big Apple very difficult. He recently spoke about his year(ish) in New York during a Q&A with NJ.com and it is extremely depressing.

Gallo said that he tries not to go out much because he doesn’t want to be noticed. It’s brutal.

Q: What’s it been like for you when Yankees fans notice you on the streets? Are they rough on you away from the ballpark, too?

Gallo: I don’t go out in the streets.

Gallo: Yeah. I really don’t want to show my face too much around here.

Asked about what he has learned during his time with the Yankees, Gallo went so far as to say that he hit rock bottom.

“I went through a lot of adversity and I really had to question myself a lot. My confidence suffered. I would say I hit rock bottom for the big leagues. So for me, I just was trying to remember to be a good teammate, play the game the right way, play the game hard and not do something stupid that I’d regret. I learned a lot about myself, I guess. Baseball is a tough game. But it definitely made me stronger because not many people have gone through what I’ve gone through.”

As the trade deadline approached, Gallo was expected to be traded again. He said that a fresh start will suit him well.

“Yeah, I think feel like people are a little sick of me here, so I don’t really know what else I can do at this point here. I haven’t played well, so I think it’ll help me to move on.”

Gallo also said that he doesn’t know if Yankees fans can get any tougher on him. As a result, he said that opposing players on other teams have approached him to try and keep his moral up.

“It makes me feel like a piece of s**t, honestly. I remember playing here with the Rangers watching guys get booed off the field and thinking, ‘Holy s**t! I feel bad for that guy.’ Now it’s me. I do appreciate people reaching out, but it makes me feel like I’m a problem.”

Despite all of his struggles on the field and off, Gallo said that he is going to miss his Yankees teammates.

“I’m actually really going to miss this team, miss these guys. It’s going to be really tough to leave these guys. We’ve had a lot of fun. We’re a really close group. But moving on is part of the business. I’m ready.”

Gallo may miss his fellow Yankees, but it does not sound like he is going to miss the city or the fans. People forget that there is a human element to sports and that people have feelings.

We’ve been bummed about Joey Gallo not working out, but everyone *please* gain some perspective before making another guy’s life miserable in public — outside the stadium, even — just because he can’t adequately hit a ball with a stick while wearing pajamas. https://t.co/tdhmb4Gddi

Gallo’s feelings are hurt from his time in New York and the way that he speaks about his short time with the Yankees is rather sad.