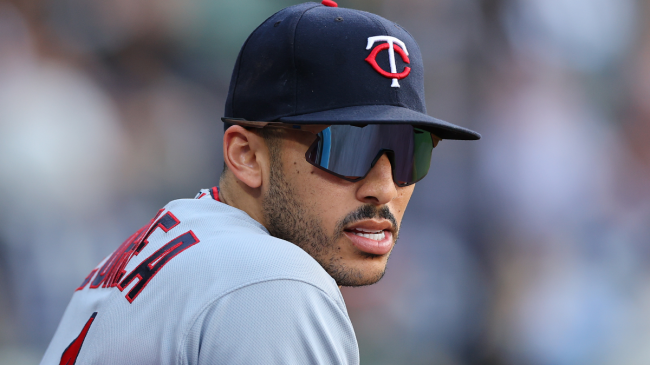 Carlos Correa hasn’t been a member of the Houston Astros since the 2021 season. Still, his ties to the organization are keeping one major franchise from pursuing him.

The All-Star shortstop was a member of the 2017 Houston team that won a World Series. Unfortunately, that title season now boasts an asterisk due to a cheating scandal that broke after the fact.

The opponent they took down in that final series? The Los Angeles Dodgers, a team that’s now on the hunt for middle infield talent. And while Correa might’ve played for the Twins last season, those salty LA fans are still holding a grudge.

Correa experienced his best MLB season in 2017, hitting .315 and smacking 24 home runs. He was a killer in that seven-game World Series set, racking up eight hits and knocking in five runs to help his team escape with a 4-3 series victory.

The shortstop might’ve benefitted from Houston’s sign stealing scheme to land those impressive offensive numbers, and the Dodgers aren’t about to forgive and forget.

Ken Rosenthal of The Athletic reports that the organization refuses to pursue the highly touted free agent due to the negative fan response likely to follow.

“The Dodgers are not pursuing shortstop Carlos Correa in part out of concern that a sizeable portion of their fanbase would not welcome the move. Correa was the most outspoken member of the 2017 Astros club that stole signs illegally during the postseason and beat the Dodgers in a seven-game World Series.”

After losing Trea Turner to free agency last week, LA is looking for a replacement up the middle. Correa offers a strong bat and a solid glove, but it appears the past is too painful to let go.

The Dodgers have just one World Series win since 1988 despite consistently fielding one of the MLB’s most expensive rosters. The front office might want to focus on getting the best option rather than letting the fans decide on their signings.