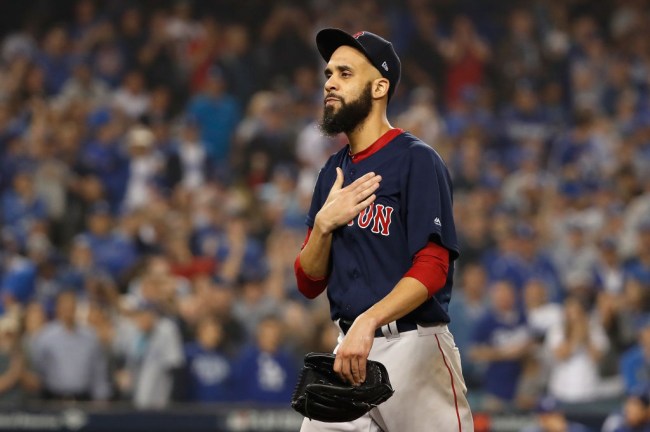 Throughout the postseason baseball fans have accused Red Sox pitchers of using banned substances like pine tar to gain an advantage on his opponents.

Here is a video that went viral during the Astros-Red Sox series that appears to show Matt Barnes doctoring the baseball with pine tar.

This pitcher had pine tar on his arm! Wtf?!? My uncle caught this. @espn @astros @SportsCenter @MLB pic.twitter.com/l3GX8utrto

Boston won the World Series last night and this time Red Sox ace David Price was accused of using a sticky substance in a dominating performance against the Dodgers in game 5.

Hey @DAVIDprice24 what was on your hands?? Sweat doesn't do that

World Series @DAVIDprice24 looked like he had sticky hands. Anyone else catch his shirt stick to his hand as he patted his chest? 🤔

Looks like David Price has something sticky on his hands 👀👀👀 #WorldSeries2018 pic.twitter.com/nes4wIfqux

Why is David Price’s glove hand sticking to his jersey? #pinetar pic.twitter.com/EHaLp4EgGw

It’s called sweat. Learn about it. It causes things to stick

Lol yeah on his glove hand. Give it a rest.

Hey MORON, you do realize @DAVIDprice24 throws LEFT HANDED and the hand sticking to his shirt is his RIGHT HAND (the one he DOESNT throw the ball with) right? Maybe your just too salty to realize how stupid you sound/look .. @LouMerloni look at this joker