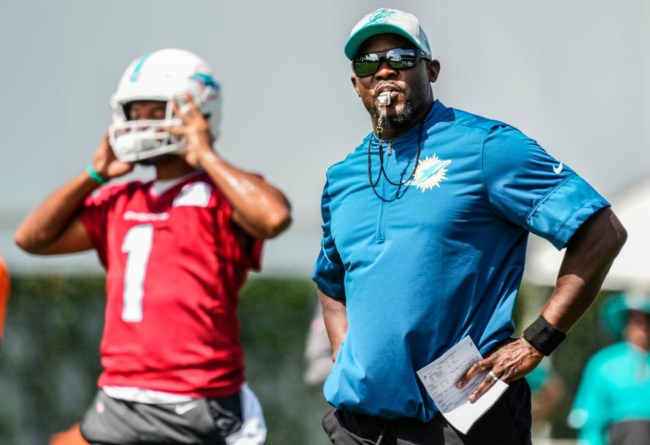 The vast majority of NFL fans and media members alike were stunned by the news of the Miami Dolphins parting ways with Brian Flores. Given how big of a shock the move was, speculation as to why the Dolphins decided to fire him grew quickly.

Some wondered if Flores and quarterback Tua Tagovailoa didn’t see eye-to-eye, and a new report suggests that the two did get into a shouting match during halftime of a game earlier this season.

South Florida Sun-Sentinel reporter Dave Hyde published a column calling out the Dolphins for their decision to fire Flores. In his column, Hyde described the profane-filled exchange Tua and Flores had during the season.

“It started at halftime with a meltdown in the locker room as their season melted down on the field. Coach Brian Flores was angry at quarterback Tua Tagovailoa’s dismal half. He said things. Tua said things back.

Some people out there may jump to the conclusion that this exact shouting match was the main reason behind Flores’ firing, but it’s hard to believe that’s the case.

Football coaches yell at players, even at the NFL level. Flores and Tagovailoa traded f-bombs back and forth isn’t the first time, nor will it be the last, that a QB and his coach have yelled at one another.

The Flores firing truly is a head-scratching moment as he led the Dolphins to back-to-back winning seasons and swept the Patriots during the regular season on top of that. He never led the team to the postseason during his three years, however, which is the end all be all in the NFL.