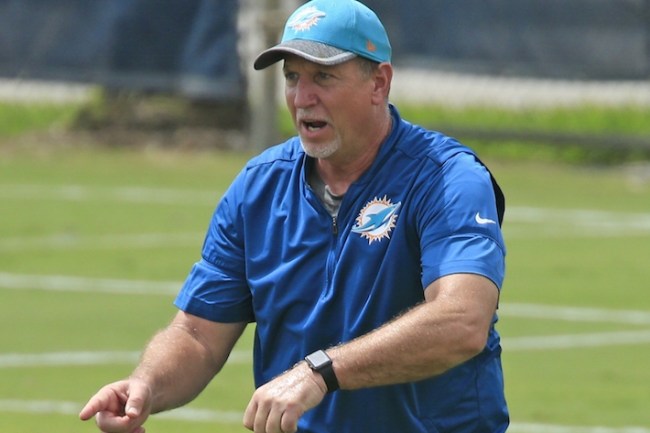 Miami Dolphins assistant coach Chris Foerster was pushed to resign from his position of run game coordinator/offensive line coach after a video of him snorting cocaine off his desk went viral in October. The 56-year-old lost it all: his job, his family, most likely his marriage, and much of his dignity.

Now, he is currently living on a diet of salami and canned tuna after a 60 day stint of intensive inpatient drug and alcohol treatment. Today, Foerster resides at a sober living facility in South Florida and according to NFL.com, he is drug-tested twice a week and occasionally awoken at midnight to blow into a breathalyzer.

Kijuana Nige, the woman who outed Foerster and humiliated him in front of millions of people, he met through a backpage ad while bored in California this past September with the Dolphins. He partied with her for two days, and before he sent Nige the infamous video in September, he had used cocaine for eight or nine consecutive days. His plan was to polish off his stash before boarding a plane to London for a game against the Saints, stay awake on the plane to get work done and sleep after practice the next day. Speaking publicly for the first time by phone to NFL.com reporter Tom Pelissero, Foerster said that as he was boarding the plane, he had realized he’d had enough.

Foerster claims that this was the last time he used cocaine, which doesn’t mean he wasn’t vulnerable to fall back into bad habits. Although he claims he’s “never felt better” or “been happier,” the disgraced coach has a long way to go in mending fractured relationships. He has three grown children–none of which have talked to him much since the incident and only his daughter went to visit him in rehab.

The man whose been an NFL coach for 25 years and a college coach for 10 claims he wants to get back to coaching, but knows that may not be in the cards.

“I’ve been blessed. I made a terrible mistake and I’m responsible for it, and I didn’t go to treatment because I wanted to get my job back. I knew this s— was out of control. It’s been the most humbling experience. But it’s what I needed.”