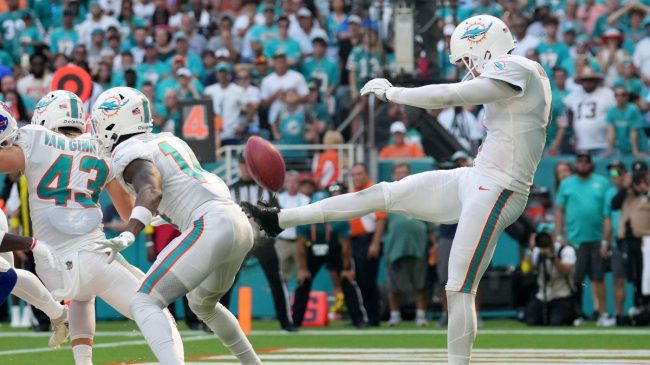 The Miami Dolphins kept the Buffalo Bills at bay but it wasn’t without a potentially crucial safety late in the fourth quarter. Of course, everyone is familiar with the butt punt by now. It gave Buffalo two additional points along with possession of the ball. However, it appears that special teams coordinator, Danny Crossman, finds no amusement in the hilarious Week 3 mishap.

Dolphins Coach Danny Crossman Is Completely Over The Butt Punt

According to Barry Jackson, Crossman is not quite over the butt punt. When the Dolphins coach was asked about the incident just two days later, he responded by saying “Absolutely zero amusement and a 100 percent critical mistake that has an opportunity to possibly lose a game. It never will get a smile from me.”

"Absolutely zero amusement and a 100 percent critical mistake that has an opportunity to possibly lose a game. It never will get a smile from me."

Although the rest of the NFL world found the butt punt hilarious, it seems the Dolphins do not. Thomas Morstead hasn’t said much about the accidental safety. Additionally, Mike McDaniel has barely shared his take on it. Considering Miami got the win, you’d think someone within the organization would lighten up a bit.

We’re sure Thomas Morstead feels awful, along with his teammate who was struck from behind. Regardless, the NFL is a serious business and the Dolphins have a real shot at making a playoff run. However, can’t we just sit back and laugh at the silly mistakes sometimes?

Look, we know it was a crucial moment that could have cost the Dolphins the game. But it’s hard to believe that Danny Crossman is “never” going to find the butt punt funny. Enough time will eventually pass when he can look back and finally laugh. It might be 50 years from now, but as Justin Bieber would say, never say never.