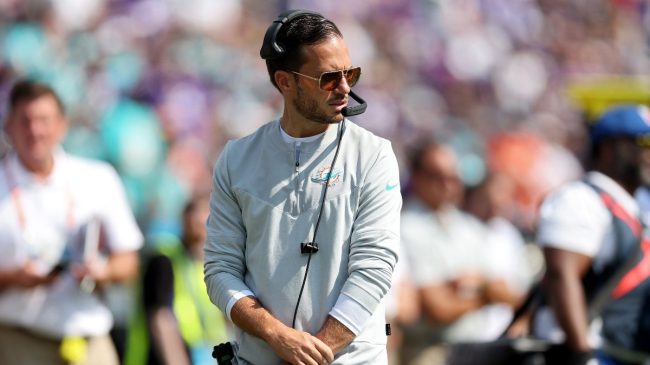 The Miami Dolphins had a comeback win of the century (maybe an exaggeration but whatever) over the Baltimore Ravens. At first, it seemed Baltimore was running away with it, but then in the third quarter, everything turned around. Head coach Mike McDaniel now responds to the surprising victory in the most hilarious way possible.

Miami was down 28-7 entering halftime. Typically that’s too large of a margin for a football team to get back into the game. However, the Dolphins had other plans. Mike McDaniel claims he “wanted to see how we respond to a deficit,” which is what a great coach would tell their team. Regardless, his next statement has everyone laughing.

Yeah, apparently so, Mike. The Dolphins lit up the scoreboard as Tua Tagovailoa threw six total touchdowns by the end of the game. This statement from Mike McDaniel is perfect though. He brings a unique, laid-back demeanor as a head coach in the NFL. It’s rare to see that in a coach in any sport. If anything, this just proves McDaniel is the absolute man and he’s the right guy for the job.

We’ll see if the Dolphins can maintain their winning streak. They have a tough matchup ahead as they take on the Buffalo Bills in Week 3. Based on how Miami has performed recently, there’s reason to believe this AFC East showdown could be one of the best games of the 2022 season.