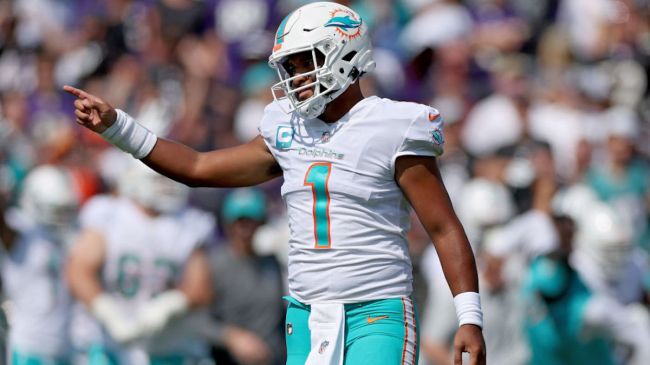 One of the oldest heads here at BroBible is Jorge Alonso. You may know him on Twitter as @gifdsports. Jorge is a Miami native and therefore a proud Dolphins fan. So, following Miami’s stunning comeback win against the Baltimore Ravens, I asked the simple and legitimate question: is Tua Tagovailoa actually good? What’s up with his throwing motion? Is it all simply because he’s a lefty?

Lo and behold, just a few hours later, I came across a viral Twitter video that seemed to hold the answer to my question: Yes, Tua is actually good, and the reason I’m having a hard time comprehending that fact is that he’s left-handed. Don’t believe me? Just check out the response to this video (and his stat line from Sunday, which boasted 36 completions, 469 yards, and six touchdowns).

I flipped this video so Tua is a right handed QB, and it really changed the way I view his throw pic.twitter.com/c8tBH5TKU2

One analyst from ProFootballFocus jokes that “inverted Tua” is an all-pro quarterback.

this is actually scary how different it looks https://t.co/Pc8VYQrN12

Fully sold on Tua after watching this video https://t.co/3mB5MRLg99

Lmao this is crazy https://t.co/M0oLd7tLFl

A Baltimore Ravens fan recalled when something similar was done to Bubba Watson highlights:

I remember when somebody did this with Bubba winning The Masters as a righty, and I hate to admit that it's still very cool. https://t.co/5FM2OkGky8

Wow I can see it now. Tua is good https://t.co/eNyaNIsXEm

Now 2-0, Tua, head coach Mike McDaniel and the rest of the Miami Dolphins will try to prove they’re truly a threat in the AFC East when they take on the Buffalo Bills, this year’s Super Bowl favorites, on Sunday in Miami.

As for the Ravens, they’ll look to rebound from Sunday’s collapse against the Dolphins when they take on their longtime foes, Bill Belichick’s New England Patriots.