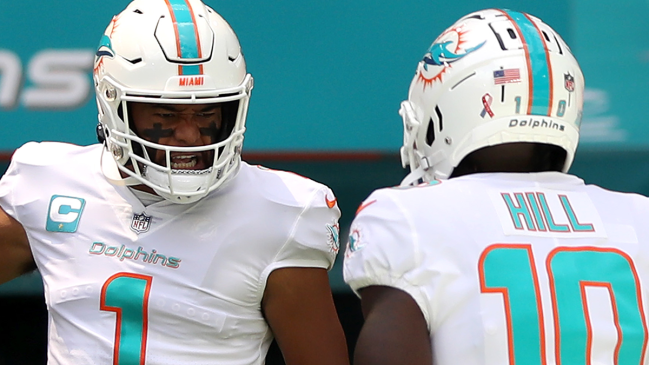 There were plenty of questions surrounding a Miami Dolphins team that knew it had plenty of things to prove heading into the season after hiring first-year head coach Mike McDaniel to lead a squad whose success was seemingly contingent on the play of quarterback Tua Tagovailoa.

The fifth overall pick in the 2020 NFL Draft showed plenty of promise during his first two seasons in the league, but there were still plenty of people who were skeptical he’d be able to take his game to the next level.

However, it’s safe to say Tyreek Hill was all-in on Tagovailoa based on the praise he’s routinely heaped upon the QB since the fairly shocking trade that sent the wide receiver from Kansas City to Miami back in March.

Hill understandably turned some heads when he dubbed the Alabama product “one of the most accurate” passers in the league, but he remained Tagovailoa’s most dedicated hype man ahead of a campaign where he was relying on the third-year player to step up and prove the doubters wrong.

It’s safe to say Tagovailoa has managed to do that so far. After kicking off the season with a win over the Patriots, the Dolphins improved to 2-0 after beating the Ravens in a 42-38 game where the QB threw six touchdowns (two of which came courtesy of the man known as “Cheetah”).

SECOND TD OF THE DAY FOR @cheetah‼️ 🐆

Last week, Hill made headlines for his, um, colorful description of McDaniel’s gutsy playcalling, and he harnessed the same energy while praising his QB’s skills while chatting with ESPN’s Kimberley A. Martin after the victory.

Tyreek Hill had no idea how many TDs Tua threw against the #Ravens until I told him 😂 … Here’s part of the interview that aired on @SportsCenter #dolphins pic.twitter.com/lIOfuDbVE1

Here’s what he had to say after learning Tagovailoa threw for six scores during the postgame interview:

It’s hard to think of a better guy to have in your corner.