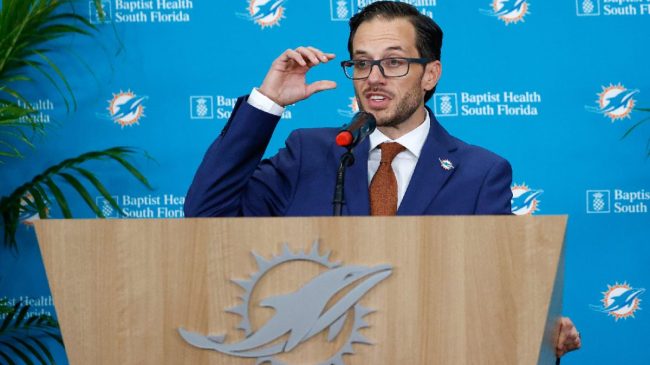 Mike McDaniel won his debut with the Miami Dolphins on Sunday, taking down division rival New England 20-7 to open the season. The dominant win saw Miami take an early 17-0 lead and cruise to an easy win.

Patriots’ fans might not be happy with their head coach Bill Belichick, but for the Dolphins, things don’t get much better. And McDaniel’s leadership was on full display. Fans and media, alike, took note of some of the gutsy calls made in the opener.

But none of those words matched the compliment received by his star wideout Tyreek Hill.

Tyreek Hill was heard commenting on McDaniel’s debut with the Dolphins. He provided football viewers with the quote of the day.

Take a listen to what Hill had to say in his postgame interview following the team’s big victory.

“McDaniel’s going to need a wheelbarrow for his nuts to carry them around because he’s got a lot of cajones. It was a gutsy call by him.”

The quote references a fourth and long call that McDaniel decided to go for late in the first half. The Dolphins drove 92 yards down the field, culminating with a 42-yard touchdown pass on that fourth down call.

Everything went McDaniel’s way in his head coaching debut. We’ll see if the gutsy play calling continues to pay off for the Dolphins as the season goes on.