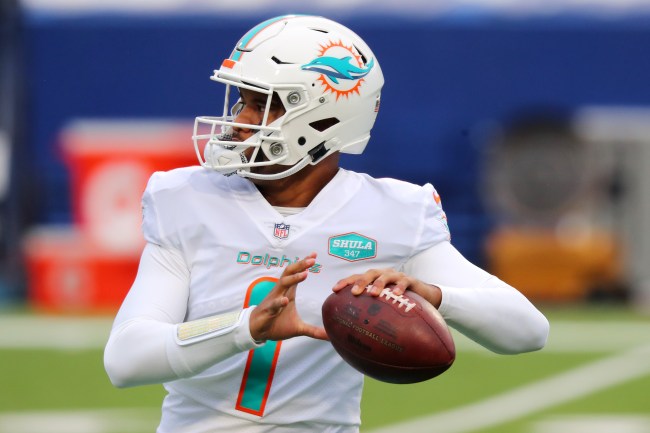 It seems like the honeymoon is over between Dolphins fans and rookie QB Tua Tagovailoa.

Earlier this week, FS1 host Colin Cowherd suggested on his show that the Dolphins should probably consider trading Tua and drafting a QB with the top 5 pick they’re getting from the Texans from the Laremy Tunsil trade.

Would the Dolphins think about drafting Justin Fields or Zach Wilson if Tua struggles again on Sunday?@ColinCowherd: Miami will never under Brian Flores have a Top 3 pick again. Just a thought. pic.twitter.com/Fx2Q1Jxeni

…
“I’m gonna throw a scenario at you. Buffalo hosts Miami on Sunday, Buffalo is a better team. What if Tua struggles, gets benched a third time, Miami misses the playoffs, and tomorrow’s headline is ‘NOT TUA IMPRESSIVE.’ What does Miami do with the number three pick from Houston? Think about this – their defense is GREAT, the number one scoring defense in the NFL.

Tua has not been a disaster and somebody would absolutely trade for Tua. Justin Herbert and Joe Burrow were asked to carry bad teams; Tua has been asked to manage what appears to be a very good team. Look at Tua’s yards per game, it’s LAST in the NFL among qualified starters. Herbert averages almost 300, Burrow almost 270, and Tua is at 160. He’s done fine at managing a game, but every time he’s been asked to do more and WIN a game that’s not really what he can do.”

Dolphins fans initially scoffed at the idea of trading Tua but the young QB once again struggled against the Bills on Sunday in a must-win game.

What is Tua doing????? pic.twitter.com/7EynbO1vbU

Another interception for Dean Marlowe on Tua. This one is getting out of hand. #Bills pic.twitter.com/sHvOzgxdYO

During the game, Fins fans began calling for the team to trade Tua and to replace him by drafting a QB in the first round.

As an actual Dolphins fan, I speak for all of us when I say we don’t want Tua here. I think it serves us best to trade him and find a real QB that could actually lead us to a Super Bowl. Trade Tua he reeks. #TradeTua #tuasucks #tuascared #FinsUp

Trade Tua while you can and build that roster. You have a top 5 pick from the Texans to get a QB

Dolphins need to trade up and get the #1 qb tua sucks https://t.co/RHQ4TDAipc

#TradeTua a small qb in the nfl is fine, but you have to be exceptional at something. Big arm? Quickness? I don't see Tua with any of those traits. Don't be fooled by a smaller college qb who has studs all around him.

Tua with a dazzling

@ian693 Tua’s time is up, I’ve seen enough already. Trade picks back to HOU for Watson, will send Tua with the picks.

Dear @MiamiDolphins get a QB. Tua is not and was never the answer. Trade the top 5 pick for Dak. The 1 mess up not taking Herbert. Signed life long fins fan.