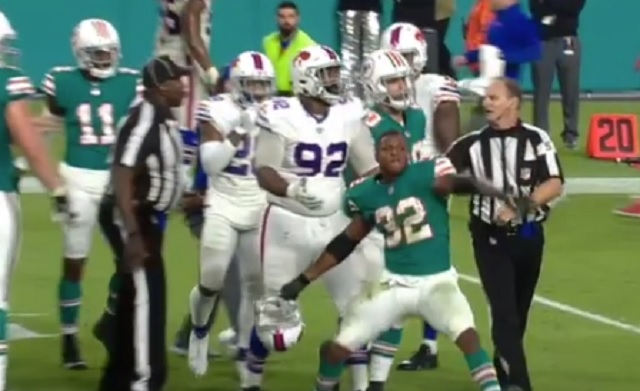 The rivalry between the Dolphins and the Bills is still very much a live. Just a few weeks both teams were involved in an a very chippy game.

The AFC East’s ugliest rivalry added another chapter Sunday, with Jarvis Landry apparently crossing the line with an official (setting up a rare first-and-35), Jesse Davis claiming he was cold-cocked by a Bills defender and four unsportsmanlike conduct or unnecessary roughness penalties.

“Rivalry game. Playoff implications. It was cold,” running back Kenyan Drake said. “Probably didn’t want to get touched. At the end of the day, that’s the type of football that both teams got an M.O. for. The refs were real sticklers out there for it. We’ve just got to be smarter.”

Things got a bit heated between the Dolphins and the Bills again today after Dolphins wide receiver Jarvis Landry scored a touchdown with 6 minutes left in the game, and then went after a Bills player for talking trash. During the scuffle between the two teams, Dolphins running back Kenyan Drake went on to toss a Bills player’s helmet across the field in frustration.