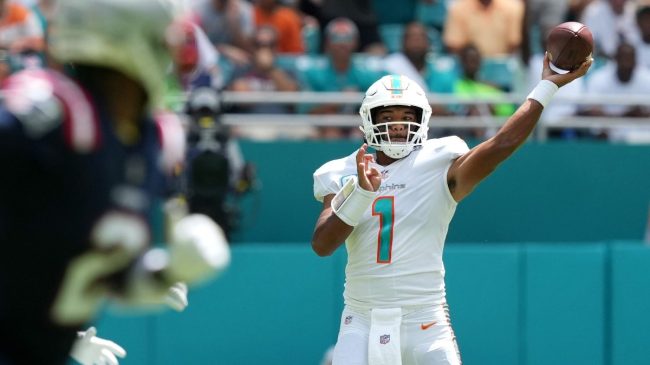 Nobody is quite sure what to expect when evaluating Tua Tagovailoa. The Miami Dolphins quarterback has flashed potential, but it hasn’t been enough to convince fans that he’s the franchise player the club needs. To make matters worse, Tagovailoa admitted something he struggles with under center and it has the fanbase losing their minds.

During a press conference with the media, Tagovailoa was asked about how practice translates to the games, per Jeremy Klump. Instead of answering that question, the Dolphins quarterback went on to explain how he can’t see while standing in the pocket.

This is a real quote from the starting QB of the Miami Dolphins 😂😂😂 pic.twitter.com/KO8lLCwxRL

It’s a disadvantage for many short quarterbacks, but this is the first of our knowledge of a player openly admitting it. We’ve never heard Drew Brees complain about it, nor did Kyler Murray. Brees is going to be in the Hall of Fame while Murray is one of the most exciting young quarterbacks in the league. So it’s weird to hear the Dolphins QB admit his shortcomings (see what I did there? I’ll be here all week).

Despite that, Tua Tagovailoa put on a solid performance against the New England Patriots in Week 1. He didn’t do anything spectacular, but he got the job done. With a statline of 23 completions for 270 yards and a touchdown, Tagovailoa did more than enough to help the Dolphins secure the win.

At the end of the day, that is what matters. As long as Tagovailoa is able to navigate the pocket and find the open man, it doesn’t matter. Regardless, Dolphins fans aren’t too thrilled with his quote.

They drafted the wrong Qb. That’s the answer. Hindsight is 20/20. I admit I wanted Tua but definitely would’nt have been overly concerned if they drafted Herbert .

Okay, but this actually made us laugh.

We got a “B”! pic.twitter.com/zus3tRVEJw

He needs a PR team BAD. He’s too honest and upfront to the media. 3rd time he’s said the quiet parts out loud.

We’ll see how it all plays out for Tua Tagovailoa. As long as the Dolphins win games, then this quote won’t matter in the slightest.