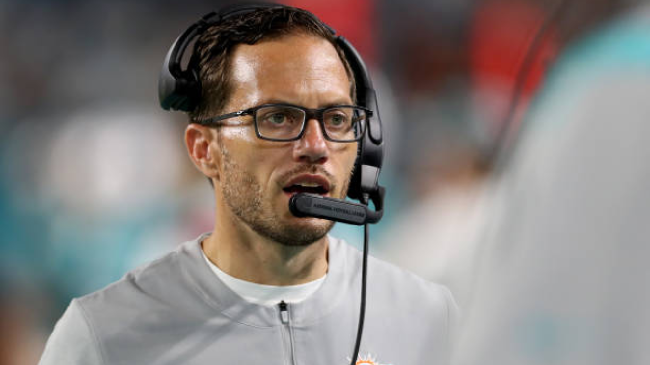 Mike McDaniel’s head coaching career got off to a pretty great start this weekend.

The Miami Dolphins opened the season with a matchup against a division rival in the New England Patriots. The Dolphins cruised to a win over Bill Belichick’s Patriots, taking the lead with a 1st quarter field goal and never looking back en route to a 20-7 win.

It’s the type of start that a 1st-time head coach dreams of. However, McDaniel has somehow managed to get people talking about something other than the Dolphins’ triumphant start to the season.

Today, he was speaking to the media and made a revelation that will be one of the first things football fans remember about him for years to come.

McDaniel revealed that when he was coaching with the San Francisco 49ers, he had a disgusting habit that he is no longer able to indulge in as the head coach of the Miami Dolphins. According to McDaniel, he used to be able to make it through most of the week at practice without showering.

Line of day: McDaniel says in SF he could push it from game day to almost Wednesday without showering. "Now, it would be obvious."

While fans realize that there are plenty of sacrifices that come along with being an NFL head coach, I don’t think any of those sacrifices had anything to do with shower frequency.

For McDaniel, it might not even be a sacrifice he has to stick with. If the Dolphins keep winning I don’t don’t think there will be anybody in Miami who cares if he smells terrible.

McDaniel’s players and fellow coaches will likely be hoping is new hygiene habits are here to stay as that Florida humidity could make him pretty tough to be around if he returns to his 49ers shower schedule.