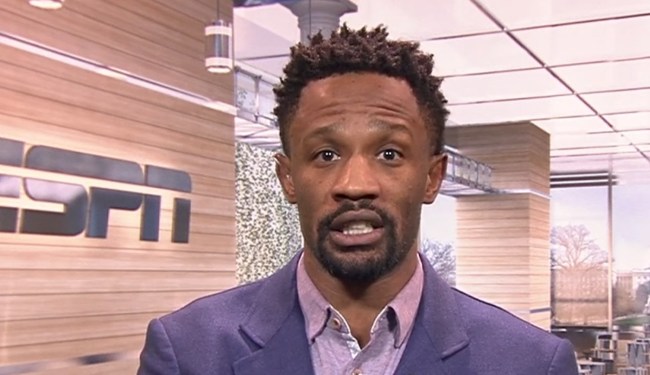 It’s a day that ends in the letter ‘y’ so someone in the mainstream media circle has said something ridiculous. The latest honor goes to ESPN’s Dominique Foxworth during his appearance on ‘The Right Time with Bomani Jones’ podcast when he went on a tangent about Josh Allen and his fans.

Just to reiterate here, Foxworth, a 37-year-old man, is triggered by random people on social media that have the American flag, dogs, and skull and crossbones on their profiles.

“I am fully aware that I have biases. And my biases are not based on Josh Allen. It’s based on the people that are defending Josh Allen. I would be 100 percent lying if I said that when Josh does something dumb, a little part of me doesn’t get happy. And it’s not because I don’t want Josh to succeed,” Foxworth explained.

“It’s because the people who are telling me that Josh is the second coming and Josh is better than everybody are people with American flags and dogs and skulls and crossbones. If you go just take a dip into their tweet history, it’s some really concerning retweets and likes. It’s not about Josh,” Foxworth said.

Imagine being so angry at the American flag you go into an NFL quarterback’s follower list, dig around, and find that a majority supports the flag therefore you root against the guy.

The American flag, dogs, and skull and crossbones make up “the ground on which we are fighting” in Foxworth’s mind.

“Generally, I’m pro-player and I’m looking for ways to understand a player’s position and defend a player. But in Josh’s case, it’s not about him. He is the ground on which we are fighting.”

Just imagine if another ESPN personality came out and said that they get happy when Cam Newton or Lamar Jackson does something dumb because they dislike what their fans (random people) post on their social media accounts.

Sorry for all of you out there that have ever posted something about the American flag, your dog, or used the skull and crossbones emoji, you’re bad people in Foxworth’s eyes.