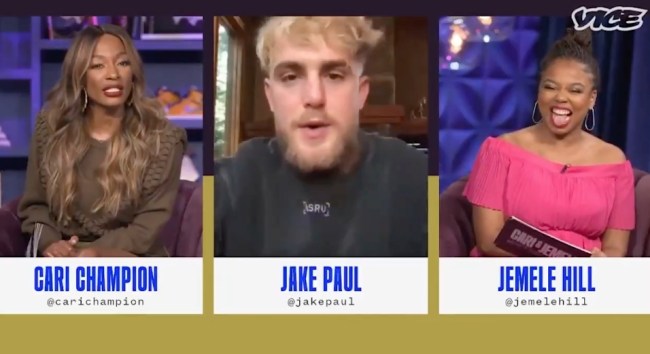 Jake Paul ended Nate Robinson when he knocked him out cold during their boxing match on the Mike Tyson – Roy Jones Jr. undercard. Robinson immediately went from ‘the undersized, three-time NBA Dunk Contest champion’ to ‘the former NBA player that was put to sleep by a YouTuber’ as soon as he hit the canvas.

The majority of people out there probably recapped the fight as a younger, taller guy with boxing experience knocked out a former NBA player with zero boxing experience. Others, like Jemele Hill, decided to make it about the color of their skin.

Hill, who now co-hosts a show on VICE with fellow former SportsCenter host Cari Champion, started the segment by saying that she “almost had to protest the show” because she legitimately thinks Paul knocking out Robinson in a boxing match was racist. That led to her asking Paul her question of the week:

“Considering where we are right now in our racial conversation in America, was what you did to Nate Robinson racist?”

Hill laughs right after asking the question, but I think she’s more serious than joking around. It’s probably a bit of a tongue-in-cheek question, but she still asked it, and it’s still absolutely absurd. Hill was trying to bait Paul assuming he doesn’t have a brain, but he didn’t fall for it.

She continues and says “it’s a sensitive time right now, we just had to witness a white man knock out a black man smooth out.”

I’ll remind you that the knockout took place in a legitimate boxing match that both guys agreed to, and made a ton of money from, but Hill just couldn’t help herself from pointing out the color of their skin.

Question of the week: was @jakepaul KO to Nate Robinson racist? 😭 pic.twitter.com/ogSqHj764s

Initially watching this clip I thought Champion was going to stay out of the ‘conversation’ but after Paul said it was a “shitty question,” which it absolutely is, Champion questioned why it was a bad question and said Paul needs to wake up and be a part of this conversation.

Hill and Champion were on top of the sports media world not that long ago and are now hosting a show on VICE asking a YouTuber if it was racist for him to knock a man out in a boxing match.

Paul putting Robinson to sleep has nothing to do with the racial tension, circumstances, injustices, and very real conversations that are happening and continuing to happen around the United States.

Hill knows that, but she has nothing else to talk about. She doesn’t have an entertaining spin on the fight. When she can’t come up with an original thought, she looks at skin color, divides her audience and a portion of the country, and collects a check for doing so.