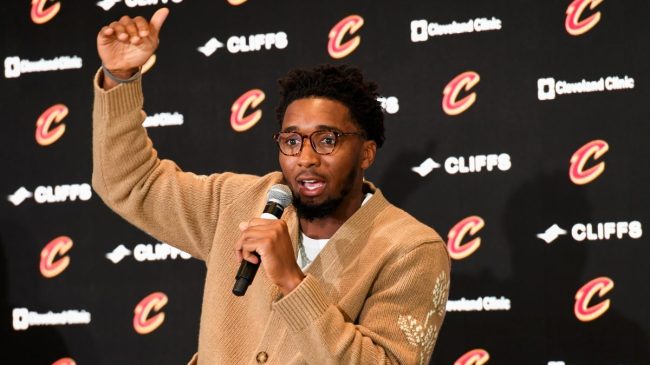 It looks like Danny Ainge may have some explaining to do.

The long-time Boston Celtics GM moved into an executive role with the Utah Jazz in December of 2021 and quickly made his mark on the franchise. Ainge blew up Utah’s core of Rudy Gobert and Donovan Mitchell. Ainge sent the three-time NBA defensive player of the year to the Minnesota Timberwolves in a blockbuster deal. He then shipped Mitchell, a three-time NBA All-Star, to Cleveland in a move that shocked the entire basketball world.

Ainge explained the drastic moves by stating that the former Jazz teammates “really didn’t believe in each other.”

But Mitchell isn’t buying that explanation.

Mitchell recently sat down with Brian Windhorst of ESPN and discussed his future in Cleveland as well as the circumstances that led to his exit from Utah.

One of the first things the NBA star addressed was Ainge’s comments, and whether or not he wanted to stay with the Jazz.

“I don’t think we didn’t believe [in each other],” Mitchell told ESPN on Wednesday on his first day in Cleveland as a Cavalier following a Sept. 1 trade. “I said at the end of the season, don’t trade [Rudy Gobert]. Let’s figure this out, let’s do. And that didn’t happen. For him to say that after six months around the team, I disagree. But you know, at the end of the day, that’s his decision.”

Mitchell also talked about the rumors of a trade to the New York Knicks and how close a deal was to happening.

Brian Windhorst: "How close do you think you were, did you feel you were to being a New York Knick?"

Donovan Mitchell: "Very close. I won't say more than that, but I know a little bit more than most… It didn't happen and god has a plan for everything."pic.twitter.com/nOY3pPjq2Q

“Very close, I won’t say more than that I know a little bit more than most, but definitely very close,” Mitchell said. “I was truly excited when I got traded [to the Cavs], but we were, it was, it was close [to the Knicks].”

The Cavaliers jumped from 22 wins in 2020-21 to 44 in 2021-22. With Mitchell now in the field, Cleveland could provide yet another threat to reigning Eastern Conference champion Boston.