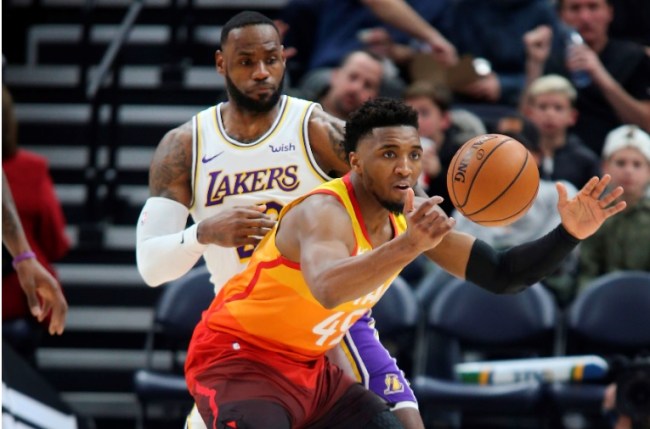 Despite the fact that the Jazz have the best record in the league, both their star players were chosen last by LeBron on Kevin Durant during last week’s NBA All-Star draft.

Utah Jazz have the best record in the NBA and Durant and LeBron left Utah's two all-stars for last in the Draft LMAOOOOOOOOOOOOOOOOOOOOOO #NBAAllStar pic.twitter.com/3tcP1LJI1E

When asked about why the Jazz players were picked last, LeBron joked that no one ever picked the Jazz even when playing video games.

LeBron says even in video games no one picks the Utah Jazz lmaoooo. pic.twitter.com/3H4RmaXeim

“There’s no slander tho the Utah Jazz. You’ve got to understand, just like in video games growing up, we never played with Utah. As great as Karl Malone and John Stockton was, we would never pick those guys in video games.”

Ahead of Sunday’s All-Star game, Mitchell was asked about LeBron’s comments and he tried to brush them off as best as he could.

Donovan Mitchell on LeBron James’ Utah comments during All-Star draft – “I don’t want to be rude but I really don’t care….people have been talking s*** about me for a while…we’re not doing this to seek the approval of him.”

Spida wasn't bothered by LBJ joking about the Jazz.

"We didn’t play this game to seek the approval of him or anyone else." pic.twitter.com/pIgP6WO5nJ