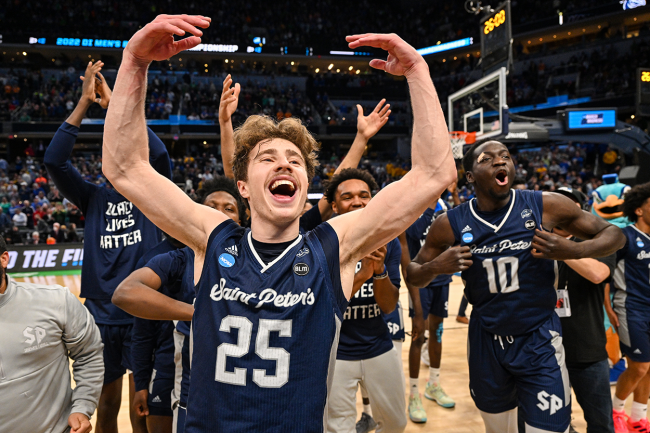 Saint Peter’s University, a school with an enrollment of less than 2,500, is the Cinderella team of the 2022 NCAA Tournament. The Peacocks have taken March Madness by storm with upset wins over Kentucky and Murray State and at the forefront is junior guard Doug Edert and his glorious mustache.

If you asked every Hollywood writer to give this character a name, they would come up “Doug Edert” 100% of the time. pic.twitter.com/PGhoYCO7Xi

Edert, who did not have any big-time offers out of high school, obviously, made only seven starts for St. Peter’s this past season. Over the course of his three seasons with the program, he averaged only 8.4 points per game.

And yet, he went out dropped 20 points in 25 minutes off the bench against a No. 2 seed on Thursday night. At that point, the internet blew up and Edert became the viral sensation of this year’s tournament.

He wasn’t done yet.

In a 10-point win over Murray State, Edert dropped 13 points with two assists and three rebound in 24 minutes. Now, Edert is a heck of a basketball player, but there is no denying that the mustache has magic powers. He even said so himself.

The origin story of Saint Peter’s guard Doug Edert’s mustache was something of an accident.

Because of the COVID-19 pandemic, St. Peter’s players were unable to go to the barbershop. In turn, Peacocks guard Matthew Lee started giving his teammates haircuts.

In early January, Edert sat down in the amateur barber chair with a mop on his head and a patchy beard on his face. After trimming back his hair, Lee turned the attention to the beard.

First, he cut down the sideburns and chinstrap, leaving only a goatee. And then he decided to cut the chin hair and leave a mustache.

Edert liked it. He thought it was funny and decided to leave the ‘stache. It was only going to be a temporary thing.

And then the Peacocks started winning and Edert started scoring. After dropping 21 points, his teammates made it very clear that the mustache was going to stay.

“I said, ‘Maybe the mustache is giving me powers,’ ” Edert told The Athletic. “And now it’s everywhere. I never thought this was going to happen, but it’s just hilarious. There’s a lot of memes, a lot of pictures online. I’m rocking with it. I love it. It’s a part of me now.”

Jamie Erdahl, who was on the sideline for Saturday’s game, spoke about just how much the mustache and Edert have blown up over the last week. Things have gotten so crazy that he can hardly even be on his phone.

But, his mustache is what is garnering all the attention.@JamieErdahl pic.twitter.com/tL7GW34pd6

At first, his mom was not in favor of the mustache. Now that he is who he is and the Peacocks are winning, she loves it.

“Look what it’s doing for him!” she said to The Athletic. “I’m very superstitious, and now he’s got to keep it. I would never have him shave it now.”

His girlfriend, Olyvia Smith, won’t even consider having him shave until the Peacocks have returned home.

“He’s not changing anything until this tournament is over,” Smith said to the NYT. “I can tell you that.”

As for Edert’s father, he had the perfect way to sum up his son’s now-signature mustache.

“James Harden has the beard. Doug has the mustache,” his father said to The Athletic. “The ‘stache is cash.”

Saint Peter’s, Edert, and his mustache will play the winner of Texas/Purdue on either Thursday or Friday. Will the legend only continue to grow?