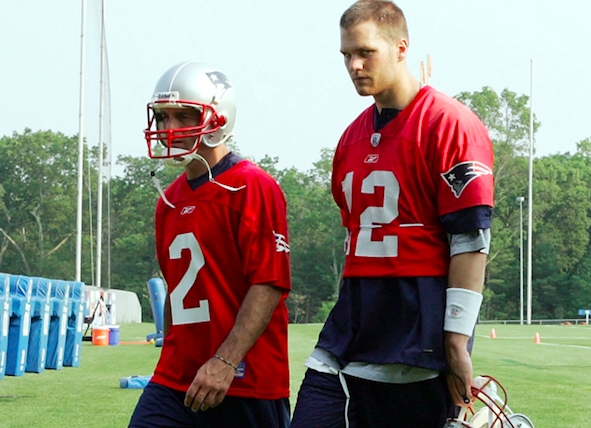 Depending on where your loyalties lie, this glowing endorsement for Tom Brady from former teammate and QB2 Doug Flutie will make you cry tears of admiration, or roll your eyeballs out of your head before puking in your lap.

I happen to think the sun shines out of TB12’s ass, so I grabbed myself some lotion and a moist towelette and told my girlfriend to piss off for 4-6 minutes.

Flutie, a Boston College legend, played for 21-years in the pros, making his last stop in New England in 2005 to play behind Tom Brady. Despite only playing in five games that season, the now 56-year-old Flutie learned a lot about what makes New England a juggernaut. Before lauding Bill Belichick over the amount of raw information he could obtain from a simple press conference from an opposing team, Eisen asked what Brady, who was in his sixth season, was like when Flutie was there.

His response is illuminating:

“Tom was great. Besides being first in, last out, hardest worker, and all that. I mean the football end of it, the IQ, brilliant. But he had a knack for making everyone feel like they were important. Everybody had a piece of this. The guy that’s in the training room, he didn’t even practice that week, Tom would go in an have a comment for him–‘you did a great job on scout team last week and you really made us better.’ Things of that nature.

I had a conversation with Tom before an Indianapolis game. We were doing the two minute offense and they played this cover 2 a little too close to the goal line and in the middle of a no huddle, two minute situation, Tom checks the play on the 15-yard line going in, looks the safety off for a second and sticks it in the corner of the endzone for a touchdown. He came straight off the field, to me, and said ‘that’s yours.’ Which is total B.S., because Tom’s done that 100 times before I got there and knew.

But he would acknowledge any contribution by anyone on the team. It was pretty impressive.”

You can listen to Flutie reminisce about his New England days below. He begins by talking about Belichick and at the 3:15 mark, Flutie turns his attention to Brady.