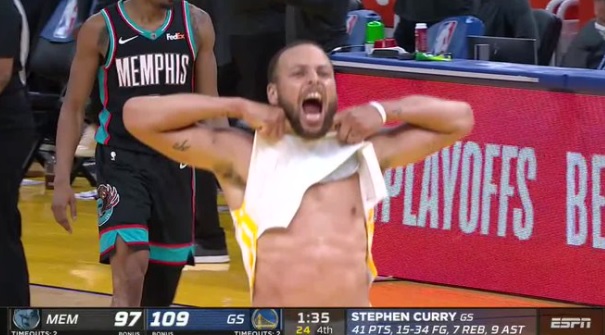 The Golden State Warriors got themselves a big win on the final game of the season and the players on the team were feeling themselves afterwards.

On Sunday night, the Warriors defeated the Memphis Grizzlies 113-101 and secured the 8th seed in the play-in tournament after Steph Curry dropped an insane 46 points.

Throughout the game, Curry could be seen dancing and celebrating after hitting wild shots.

Started dancing after the 3

Curry even went on to pay homage to former Warriors guard Baron Davis by lifting his shirt after a big shot.

After the game, Draymond Green cursed during a live interview and called himself a “muthafucking dog” before abruptly walking off.

Draymond NSFW, "I'm a motherf***ing dog… people been going at us for years with centers, that sh*t aint work yet" pic.twitter.com/cGm1jAMkbJ

It’s currently unclear who the Warriors are going to play in the play-in tournament but they seem pretty confident that they can beat whoever they face after their latest big win.