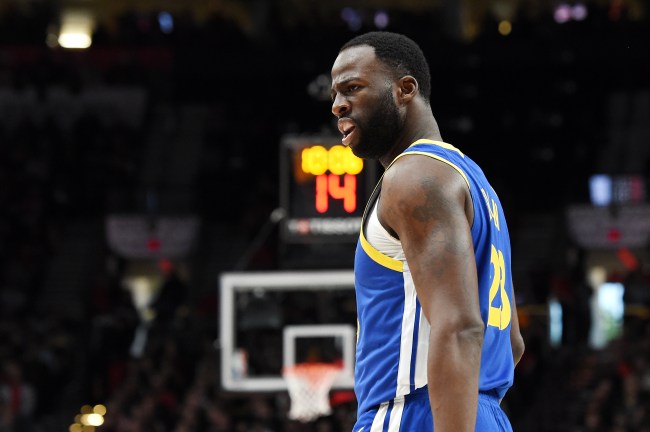 Draymond Green continued his criticism of how WNBA players are going about trying to get equal pay.

Over the weekend, Green received a bit of backlash when he suggested WNBA players stop complaining about pay and instead take action by putting pressure on corporations to give them money.

On Wednesday, Green doubled down on his comments about being tired of seeing WNBA players complain about lack of pay instead of taking steps to change their current situation.

"I'm really tired of seeing them complain about the lack of pay, b/c they're doing themselves a disservice by just complaining."
Today Draymond talked about his Tweets about women's sports that received criticism from athletes like @mPinoe & @Layshiac @kron4news #DubNation pic.twitter.com/7iUQ982jx9

“I’m really tired of seeing them complain about the lack of pay, because they’re doing themselves a disservice by just complaining,” he said Wednesday. “They’re not laying out steps that they can take to change that. It’s coming off as a complaint because the people that can change it are just going to continue to say, ‘Well, the revenue isn’t there. So if you don’t bring in the revenue, we can’t up your pay.’ They’re going to keep using that, but the reality is, as true as that is, it’s an excuse. Because everyone says, ‘We support women. We support women’s empowerment. We support women in the workplace. We do this for women. We do X for women. Blah, blah blah. And everyone uses it to their advantage, yet these women are not using these people who are saying these very things to their advantage.”

Of course, Draymond’s comments didn’t sit well with many on the Internet.

like i really can't get over how nonsensical this whole thing is. draymond's acting like wnba players should be going door to door to get people to watch games.

all while still saying they're "complaining" and ignoring the fact that they HAVE been trying to increase interest! https://t.co/9XQEl7OX32

Imagine being this ignorant and ass in the sport you speaking on. 🤧 https://t.co/VO8VvuIPAM

So he didn’t read one tweet from ANY of the female Athletes that have been telling him all the work they are doing and still not getting the results. Again, if you are not doing anything to help, then shut your mouth. https://t.co/3qWkX9HJEd

Hes tired of HEARING about it? Imagine how tired they are of living it. You think the USMNT does more for USSF than the USWNT does? 🤣 They do more with half the advertisement and investment. And to say they ‘sit around and complain’ like they haven’t been fighting this in court? https://t.co/7lHQfejNc5

A minute and 23 seconds worth of complete ignorance. https://t.co/IWMInsW4O1

Last week, a lot of WNBA players tried to meaningfully engage and challenge Green about what the real issues facing women's sports are and the work they've been trying to do for years.

The fact that after all of that, he's still saying things like this is… enlightening. https://t.co/r09FAgrxBW