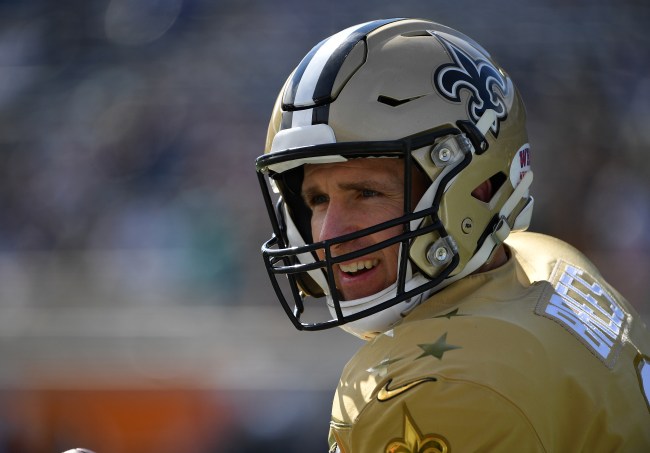 At the end of March, it was reported that Drew Brees had a massive offer on the table from ESPN to join the ‘Monday Night Football’ crew after he decided to retire. Well, apparently that offer wasn’t quite what he was looking for.

According to Andrew Marchand of New York Post, Brees is set to sign with NBC Sports over ESPN that will make him part of the NFL telecast team ‘far after he finishes playing.’

In a contract that will begin after Brees retires from the Saints, the 41-year-old will be groomed as the potential replacement for Cris Collinsworth on “Sunday Night Football,” according to sources.

“Like all NFL fans, we look forward to watching Drew continue his Hall of Fame career this fall, and we are confident his post-playing career will be just as successful,” NBC Sports spokesman Greg Hughes told The Post.

The report indicates that once Brees does decide to hang it up, he’ll begin as a game analyst on Notre Dame football as well as a studio analyst for ‘Football Night in America.”

Now the question becomes when, or if, we could see him in the booth for Sunday Nigth Football.

Mike Tirico is reportedly set to take over for Al Michaels following the 2022 Super Bowl and Collinsworth is only 61-years-old and has no plans to leave that post. The NYP does point out that NBC recently signed Collinsworth’s son, Jac, who is set to be a big part of the network’s future so perhaps Mr. Collinsworth could be persuaded in taking a studio job sitting next to his son.

As for what this means for ESPN and its efforts to replace Joe Tessitore and Booger McFarland in the MNF booth, needless to say, the search continues. The network swung and missed on trying to sign Tony Romo away from CBS, they tried to trade for Michaels and now they’ve struck out on trying to get Brees’ signature as well.