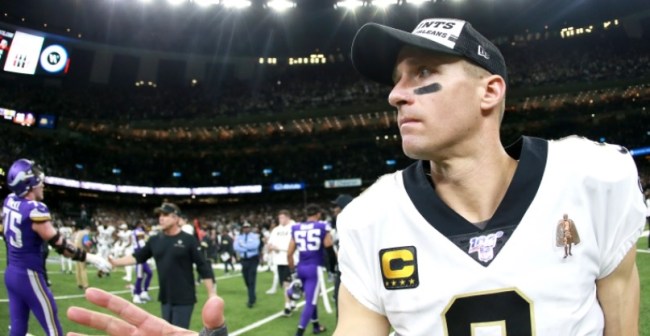 Drew Brees has done a complete 180 in the past few days over his controversial anthem comments.

On Wednesday, Brees went viral after he said players who kneel during the anthem to protest police brutality are “disrespecting the flag” during an interview with Yahoo Finance.

After getting called out by his teammates on social media, Brees has since apologized several times for his comments.

I would like to apologize to my friends, teammates, the City of New Orleans, the black community, NFL community and anyone I hurt with my comments yesterday. In speaking with some of you, it breaks my heart to know… https://t.co/Jg36d0Ad0l

According to a report from Nick Underhill, Brees was extremely emotional during a team meeting and had ‘tears in his eyes” when he apologized to his teammates over his comments.

When Brees addressed the team during Thursday’s meeting his teammates saw him in a very emotional state. They could tell it hurt him to hurt them, which mattered. He had tears in his eyes as he apologized.

His actions since then continue to support what he said on Thursday.

On Friday night, Brees even fired back at President Trump on why the kneeling during the anthem has nothing to do with the flag.

Through my ongoing conversations with friends, teammates, and leaders in the black community, I realize this is not an issue about the American flag. It has never been. We can no longer use the… https://t.co/zcw1NMZF2W