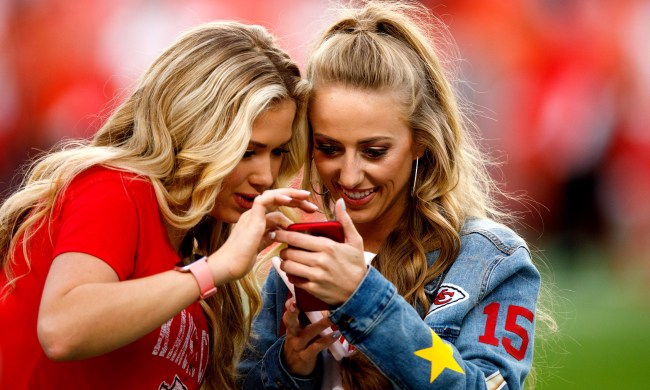 The already heated rivalry between the Denver Broncos and the Kansas City Chiefs just got a little more interesting as Denver’s latest horse on their quarterback carousel, Drew Lock, reportedly used to date Gracie Hunt, the daughter of Chiefs owner Clark Hunt (that’s her on the left with Patrick Mahomes’ girlfriend Brittany Matthews), according to SportsGossip.com, who has photos of the two together.

As the report points out, back in September Gracie Hunt did a Q&A on Instagram and admitted to dating a NFL player, but did not mention which player that was.

However, considering Lock is from Lee’s Summit, Missouri, part of the Kansas City Metropolitan Area, and played college football for the Missouri Tigers, there are more than enough commonalities between him and Hunt that could have brought the two together.

Hunt, the 2018 Miss Texas International and NFL Style spokesmodel, surely will be in attendance when her dad’s Chiefs take on Lock’s Broncos this Sunday – a game Lock claims is “just another football game.”

Of note: this won’t be the first time Lock has started at quarterback in a game at Arrowhead Stadium. He also did so as a member of the Missouri Tigers and took home a win.

On the dating front, Lock has since moved on from Hunt and is currently dating Natalie Newman who attended the University of Colorado and has an impressive 181,000 Instagram followers, according to Busted Coverage.

Like I said, the rivalry between the Denver Broncos and the Kansas City Chiefs just got a little more interesting.