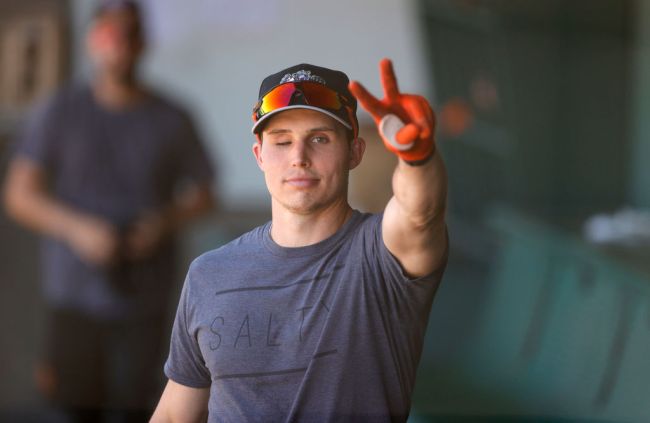 NOTE: This story has a description of a suicide attempt. If you or someone you know is having thoughts of suicide, the National Suicide Prevention Lifeline is available 24 hours a day at 1-800-273-8255.

Drew Robinson has been the best story in baseball, and across all sports, this season. 15 months after attempting to take his own life, the five-year Minor Leaguer announced his retirement last week.

At 29 years old, Robinson will end his career after his current team’s series, which ends on Tuesday. However, that doesn’t mean his story is over.

Robinson will move from the field to the front office and join the Giants organization as a mental health advocate.

In his announcement, Robinson thanked the San Francisco for giving him a chance to continue playing the game he loves just one year after losing his eye in a suicide attempt.

ESPN’s Jeff Passan did a remarkable job of putting Robinson’s internal struggles into words. I could never do his journey such justice and the entire feature story is worth a read.

On April 16, 2020, Drew Robinson woke up, spread peanut butter on a cinnamon-raisin bagel, pulsed a green smoothie, sat at his kitchen table and finished writing a note that would explain to his family and friends why he had decided to end his life.

Later in the story, Passan pens Robinson’s recount of his attempt:

At about 8 p.m., in one uninterrupted motion, he leaned to the side, reached out to the coffee table, lifted the gun, pressed it against his right temple and pulled the trigger.

That was supposed to be the end of Drew Robinson’s story.

Over the next 20 hours, he would come to realize it was the beginning of another.

Robinson, miraculously, lived nearly an entire day with a bullet wound through his head without medical attention and decided that he wanted to live.

From miracle back to the minors.

It was a miracle that Robinson survived. However, the gunshot and subsequent surgeries left him without his right eye.

Returning to baseball seemed nearly impossible, but nobody was as determined as Robinson. The former fourth round draft pick had spent time between AAA and the MLB with the Rangers and Cardinals before signing with the Giants in 2019.

He did not play a game in 2020 due to the cancellation of the minor league season amid the COVID-19 pandemic and attempted to take his own life in April. Eight months later, he signed a new minor-league deal with San Francisco.

It was another miracle when he opened the 2021 season with the AAA Sacramento River Cats. Robinson was, and continues to be, an inspiration.

Last night, he went deep in a Triple-A game for the first time this season.

Some things are bigger than sports 👏 pic.twitter.com/0PCjmY7Zva

On July 16, Robinson announced his retirement.

In his second to last game as a player, Robinson’s River Cats faced the Round Rock Express. He got the start in right field and made one of the most remarkable catches that you will see this season.

In the penultimate game of his career, Drew Robinson makes a catch for the @RiverCats that will be remembered for a long time. pic.twitter.com/2YdbzOsvFK

During the pregame, he discussed his comeback and his next chapter. He is a tremendous person and his story is an inspiration.

It was an awesome ending to one of baseball’s most incredible careers. Congratulations, Drew.